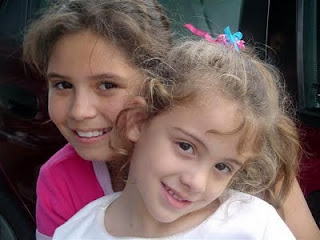 They both have eyes so brown they're almost black, and hair so thick you could use it to sew a hem.
They both hate tomatoes and mustard, but they both love beef jerky, candy, onion dip and chips.
They both are hooked on their electronic gadgets, adept at programming cell phones and updating their Facebooks.
But one is quiet and one definitely is not.
One likes scary movies the other just isn't ready for, opting instead for reruns of Spongebob Squarepants.

One loves a real boy, the other dreams about Justin Bieber.
While one can stay up until dawn and sleep til noon, the other starts to yawn at 9 o'clock.
And while one lives with the woman who gave birth to them both, the other lives with me.
They are sisters, separated by their fathers, five years, about 60 miles and adoption. Their lives are very, very different.  But they are bonded by blood. And us. 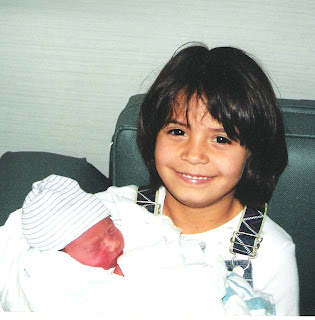 At the hospital after our daughter was born and put into our arms, I took a knee to talk to a confused little 5-year-old girl who didn't quite understand why she had a baby sister who wasn't going to live with her and her mom.
"No matter what," I told her. "This is always going to be your sister."
And I have honored that promise to her and to my baby girl. I wanted my daughter to have a blood sister, and to know her. And they do, thanks to frequent visits over the last 10 years.
Ashlee, the older sister, has been to our house several times for summer vacations and holidays. She knows our friends, our relatives, our dogs and our crazy always-on-the-go life filled with baseball games and the backyard pool.
And we make regular visits to their house on the bayou, a little cottage that has been raised 9 feet up in the air so it isn't regularly flooded by high tides and hurricanes and is always filled with cousins.
A few years ago the older Ashlee showed little sister Lora Leigh how to put a blue crab to sleep. 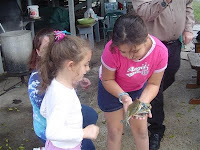 On Saturday Lora Leigh showed Ashlee around on her first trip to Barnes and Noble, the "biggest bookstore she had ever seen."

A few days before, I took them both to the French Quarter to play tourist. They both gawked at the tall buildings and the little shops filled with crazy tourist trinkets. And they both were brave enough to eat a bug at the New Orleans Insectarium, getting stamps as a reward. 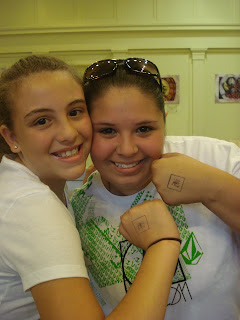 Yes. They are sisters, bonded by their blood.

And every visit goes the same.

They are thrilled at the prospect of being together again, then overjoyed to be reunited. They spend the first few days joined at the hip, playing games, doing crafts, watching TV, swimming in the pool.

"Y'all are sisters," I told them more than once during an argument over what to do together. "Not conjoined twins. You don't have to do everything together."

After a few days they are starting to get on each other's nerves, craving some personal space.  Ashlee wants to get back home to her boyfriend and Lora wants to play on the computer. Alone.

Finally by the end of the week they are acting like the sisters they are, snarking and starting to fight.  And it's time for them to separate again.

But there's always Facebook and cell phones to keep them connected. And they know they will be reunited again.  And that is how it will always be.