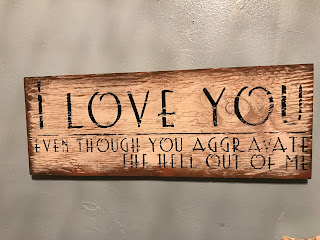 A few weeks ago, I asked my mother a serious question:

"Mom?" I said. "When I was growing up, was there ever a time when you looked at me and said, 'You know, Lori? You are really great at taking care of people. I think you should be a nurse.'"

"Absolutely not!" she replied.

Then how in the hell did I get here?

Right about five years ago, just two weeks after the former daily Times-Picayune gave me my gold watch for 25 years of service then laid me off, I became the Mother-In-Law keeper, a full time caretaker for my husband's 83-year-old mother.

For the next 16 months I fed her, dressed her, medicated her, drove her to her thrice-weekly dialysis appointments and picked her up and spent the remaining time tiptoeing around my house so as not to wake her.

To which she would reply, "Believe me, I KNOW."

When she finally got to a point that she needed more assistance than I could physically provide, my husband made the very difficult decision to put her in a nearby nursing home. She was only there a week before she took ill and died.

But I knew -- and apparently God knew -- that my caretaker days were not over.

I've been sorta watching out for my Mama for the past 11 years, when she divorced her third husband and bought a house around the corner from me under the chemical flare in the suburbs of New Orleans.

She was only in her early 70s, so she didn't need a whole lot of assistance, but apparently she believed that I, her youngest child, could do anything if I put my mind to it.

"Lori. There's a tree branch that needs cutting down in my yard. When you get a minute, can you come cut it?"

"Lori. My toilet is not working. When you get a minute, can you come fix it?"

"Lori. I know you failed math several times when you were a kid and I had to get you tutors to get through high school, but, when you get a minute, can you come do my taxes?"

Eventually Mama went to work in the French Quarter as a fortune teller, reading drunk tourists' Tarot cards and spending just about every dime she made during the day at Harrah's that night.

But as she got into her 70s, she started slowing down. She's had a heart murmur since she contracted Rheumatic Fever when she was pregnant for me. Every time she had trouble breathing and I had to take her to the ER, the doctors would tell her to get her affairs in order because she was in heart failure. That happened a few times over 11 years.

And she did have a few what we believe to be TIAs, where she would make no sense or talk jibberish. They could have been UTIs, too. Who knows?

Two years ago they even convinced her to let them do an experimental trick on her leaky valve, which worked pretty good. But she never went back to work. Fearful of running out of money, she put her house up for sale one day in May.

She sold it two days later.

After months of cleaning, tossing  and not tossing, selling and giving away her life's treasures, my 84-year-old Mama moved into a cute little one bedroom apartment in a senior living complex in our old home town. She liked to call it "The Home." I told her, "Ma. You have to be 55 to live there. I can move next door to you."

Maybe I should have.

Things weren't right. She was silly on the phone, forgetful. She became a little paranoid, believing the hospital had stolen all her money. She forgot to pay bills or paid them more than once. One night when she needed help, she called me -- but now I was an hour away.

Knowing she had a doctor's appointment in early August, I planned to go with her to discuss these things with her doctor. When I arrived to pick her up, she wasn't even dressed. She was groggy. When we got to the doctor's office, she dozed off. When she awoke, she couldn't move.

A stroke, we thought.

It wasn't. But it was the beginning of a three week odyssey that saw my Mama go from her usual kooky self to Chuckie to the Exorcist to Sleeping Beauty and back again as the doctors tried to control her out-of-control blood pressure. There were hallucinations, paranoia, ugly words said. Things I will never forget.

She remembers none of it.


Whatever this was took a huge hit on her short term memory. While she can tell you clear as a bell what she ate for breakfast on her first day of school, she can't tell you what number is the Weather Channel. Or if she ate or took her pills or the last time she took a bath.

So, at the end of August, Mama left her fourth hospital and came home with me. For good. We are in the process of packing up her things from her little apartment and moving her full scale into the mother-in-law cave, where Jane spent her final year and a half. Only a few months ago I converted it from our guest room to The Coach's baseball cave.

That same day, my employer and I decided to part ways. I had worked 14 hours the day before.

Mama isn't too happy about all this. She loved her little apartment, for one thing. She was making friends. She was close to the great grandkids. But now, she can't drive any more. She's not ready for a nursing home and assisted living is outrageously expensive. My sister lives in Baton Rouge, but she's still rebuilding her house, which was flooded last August.

So she's stuck with me.

Mama she thinks she is "putting us out." She moaned and groaned about being in the way all day yesterday as I moved the Coach's pictures and plaques from his cave to a wall in my upstairs home office, which I dusted off and reorganized for my freelancing gig (hire me!)

"Yes," I replied. "He's going to be so pissed off that I moved his bobble heads. What was I thinking?"

For the record, he loves his wall (mainly because it shows he has more stuff than me.) We still have to find a spot for the FOUR sets of golf clubs, though. And we are thinking about building a pub/pool shed in the backyard so he has a place to put his stuff.

To all of our surprise, it has been a rather smooth transition though. My mother and I fight. A lot. And we have been estranged several times. We didn't speak for three months after my wedding because she thought the photographer took too many photos (and, well, I was marrying that man). She says I don't make her feel welcome in my home; She makes me feel like I can do nothing right. Now we are living in the same house for the first time since I was 17.


Of course, this time, the roles are reversed.

And I'm the one who gave her a stern talking to this morning after I found out that she had slipped out of the bed (she didn't fall, she kind of slid to the floor -- thank goodness). That's not why I got mad, though.

I got mad because she didn't call for help, didn't bang on the floor, didn't reach for her cell phone to call me (even though I was right upstairs) because she "didn't want to bother" me.

"You're always fussing at me," she said.

I should ground her. Or take away her car.

That'll teach her a lesson. Right?

But this is what we're supposed to do. She keeps saying, "I don't want to be a burden."

Mama, you're not a burden.

But you can be a pain in the ass. 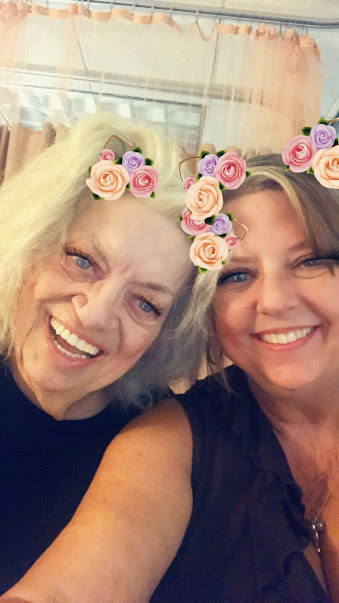