Just as she's done just about every weekday morning for as long as we can remember, my daughter climbed the stairs to my bedroom this morning -- her little puppy Lola trailing behind -- and climbed into bed with me.

"Hi," she mumbled, before pulling the covers up to her chin, rolling on her side and beginning to snore like her dad.

Just as I've done every morning, I scooted up behind her and snuggled, my nose buried in her brown curly hair. Lola found her own spot at our feet.

And just as we've done every morning, we stayed that way until the alarm went off.

But this morning was different.

This morning I paused to savor the moment, knowing that there may be only a few more like this. School ends in two days. Soon she'll be sleeping her summer days away and won't want to be awakened at 6 a.m., then again at 7.

And in just a few months she'll be a seventh grader who just might be too cool to cuddle with her mom in the mornings. Or any other time.

I put my daughter on the bus this morning, just as I've done a thousand times before.

But this time was different.

This time, I paused. I stopped. I waited. And I waved. Then I watched her ride away.

Yesterday in Oklahoma, a whole bunch of parents put their kids on the school bus with a kiss and a hug and a wave. And they didn't come back. Others came back broken. Or shattered.

The same thing happened in December in Connecticut.

And it's terrifying to know that we live in a world where that can happen.

A couple of weeks ago, I got an email asking if I would be interested in writing a guest blog for the website NewOrleansmomsblog.com.  I was thrilled! I'm happy to write for anyone who asks me these days, so I happily agreed.

A while later, I got an email telling me to come up with a topic and let them know what I wanted to write about.

Wait. You want ME to come up with the topic? Anything I want? About my snarky tweenage daughter I love to death but who drives me crazy most of the time?

Oh! The possibilities! There were so many. Too many!  It took me weeks to decide -- in between covering baseball games for the upstart New Orleans Advocate, rooting for my husband, driving Miss Jane to dialysis three times a week (and back), going to the store for more macaroni and cheese and keeping the dogs from barking at the neighbors.

I finally narrowed it down to a choice between my fruitless attempts to curb her macaroni and cheese addition (is there a Macaroniandcheese Anonymous?) or our attempts to survive her first year of middle school. Although the editors liked both offerings, they preferred the second choice


The First Year of Middle School: Challenges for both Mom and Daughter

The Coach actually broke his own story, you know.

In his little blog post that I shared a few days ago, he wrote that next year will be his last. 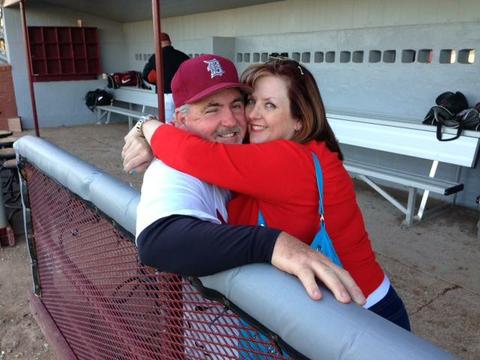 
And this... Destrehan's Marty Luquet to retire after 2014 season

And he made the 6 o'clock news.

"I didn't know this was going to be such big news," he said.

A word from The Coach

He is The Coach.

But sometimes he writes (and I correct his punctuation).

And he can make me cry.

What the hell am I going to do with him then?

I've always tried to be a good neighbor, no matter where I've lived.


Uptown on Joseph Street, on Prytania, on Henry Clay, on Willow, and in LaPlace, I parked in my own space, I kept my music to myself, I didn't have wild parties. Well, maybe one or two.


I never was a complainer, not when my upstairs neighbors used to stomp up their wooden stairs, or when the next one hung dozens of photos of his wife in various Playboy-type poses in the front sun room for all the world to see, or when my landlords turned down the thermostat that controlled my air conditioner. Or when I found out my LaPlace neighbor had nine speakers in his apartment and a boa constrictor. Or when our backdoor neighbors smoked so much weed we could smell it in my kitchen.

I DID yell at my second LaPlace neighbors who decided to cut the grass at 6 a.m. On a Sunday.

And I did get pretty angry when the current ones cut the branches on MY trees and dropped one on the huge ceramic fish by my pool. Yeah, I know accidents happen. But what pissed me off the most was that they didn't come knock on my door to say, "Oops." They just left it there for me to discover. And didn't reimburse me, either.

But when I got into an accident and my husband refused to answer the phone because he didn't recognize the number, it was nice to know that I could call them and ask them to go knock on my door to let him know. True story.

And the night our neighbor's trailer caught fire and we came home to find fire trucks all over the place, they weren't home. The firemen went in, did their job and left. They didn't even leave a note. So we waited up to let them know what had happened.


Most of my neighbors have liked me back. The Uptowners did because, back then, I had a sort-of-boyfriend who was an NOPD officer and he used to drive by my apartment on occasion in his cruiser.


Need sugar? Salt? Someone to feed your cats? Extra chairs for your crawfish boil or a pool for your guests to swim in? Sure! No problem!

I have no junk cars or spare tires, I keep my grass cut, my garden green and my pool blue.

That's what my next door neighbor called me the other day because my dog was barking at him through the fence.

"Can't you control your dogs you goddam piece of trash?"

That's what he yelled at me across the glorious green ginger in my backyard.

To which I replied, "Fuck you."

To which he replied, "Fuck you too."

And in one instant, 20 years of peace was shattered.

A few hours later, a nice St. Charles Parish Sheriff's deputy knocked on my door, aggravating The Coach and terrifying my kid. He asked me what happened. I told him. With tears in my eyes.

"It all went to crap when he called me "Trash."

And I will never forget the look on my daughter's face when she asked me, "He really called you that? The man who let me and Paige cut through his yard?"

I've been called that twice in my life. Both times because of dogs, both times by people standing on the front porch of their trailers. My mom's dog ran away once and as I chased it down the street, my mom's neighbor yelled at me, "You white trash."

The fact that it was nearly 30 years ago and I still remember it should tell you something.


I fully admit that my dogs can be a pain in the ass. I  have two at the moment.  A pair of poodles -- one big, one little, both rescues.  They're good dogs, except Lola likes to run away and drag my daughter's dirty socks all over the living room. Leigheaux is plotting to kill the mailman (or at least the truck) and has a strange compulsion to pee on my favorite chair.

And they bark. They wake us up. They wake the neighbors up. Worst of all, they wake the mother-in-law up.  They LOVE to bark. At the mail truck, the UPS man, the FedEx truck, the delivery trucks across the street, the chicken eaters, the walkers and, occasionally, the reflection of the TV. Hell, sometimes they bark at the wind.

As soon as we hear them, we try to scramble to get them back inside. But sometimes we don't hear them. And sometimes we're, like, naked. So we can't always get to them. But we do try.

I don't know what set my neighbor off this day, whether he was in a particularly bad mood or if the dogs were just unusually annoying this day. I do know this. He can't take it back. And he can't fix what he broke.

And I don't know if we'll ever be able to get it back.