Going to the mall

When you grow up in a small town there isn't a whole lot to do.

When you grow up in a small town like mine, there's even less.

Oh sure. There was a bayou in my backyard, complete with snakes, a couple of live alligators and a pair of turtles I named Ethel and Fred. We had a boat, but it was my brother's. I never took off in it or anything. I rode my bike a lot.

There was a Kentucky Fried Chicken down the street, and my mom let me walk down sometimes to get a "suicide," -- a drink in which you would squirt a little from each of the options available at the drink fountain.

And there was a Shop-N-Bag across the street, where I would go to buy sour pickles and cokes after school (and later smokes because no one carded you back then.)

But the biggest thrill for us as pre-teens, tweens and even teenagers, was going to The Mall.

By mall standards, it's no Mall of America. Or Mall of Louisiana. It's just the mall of Houma. And it was about the only entertainment we had.


I can't even count the number of Saturdays I spent cruising the halls of the mall with my friends. Well, for a long time it was only one hall. One and a half if you count the one where the movie theater was. Now it's two. And a half. Sorta.

And, later, going to the Lion's Share restaurant (that my mother insisted was a bar) to order cokes and hamburgers and rib eye steaks broiled in butter. I spent the night of my 17th birthday there -- with an 18th candle on my cake so I could drink (I live in Louisiana, people). And I met the boy I thought I was going to marry there on the first day of my senior year of high school. I used to visit him at the shoe store where he worked.

I still make occasional forays to this tiny Southland Mall, especially in the months after Hurricane Katrina pretty much shut down New Orleans and its suburbs. It's close enough. It's convenient. I know it. And it's, well, home.

Saturday afternoon I went back again. But this time was so, so different. This time, instead of leaving with something new, I left something.

I went to see a nice little man named Mr. Guidry, who owns this cute little shop called La.  Cajun Stuff. If you want or need anything purple-and-gold, black-and-gold, LSU or Saints related or marked with a fleur-de-lis, this is your place. He's got clothes and jewelry and accessories and home decor and CDs and DVDs and back scratchers made with alligator claws and a whole rack of books.

And now he has my book.

In my mall. In my hometown.

How cool is that?

I can't even begin to tell you. 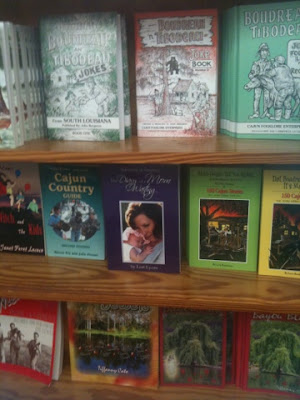 Linked up at Lovelinks #39
You can link up too!