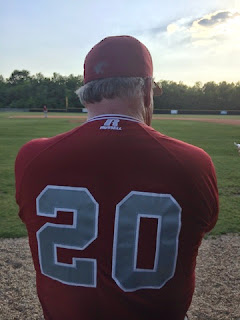 My husband, The Coach, and I have had a couple of sleepless nights here under the flare.

Most of it was caused by this wonky old window unit we had in our upstairs bedroom that started sounding like a pair of maracas on Saturday. Annoyed by the sound, The Snarky Teen, who was hanging out in my bedroom with her BFF, decided just to turn it off. By the time Coach and I turned in for the night at 11 o'clock or so (yeah, we're so exciting that way), it was 85 degrees in our room.

We turned the thing back on and forced ourselves to tough out the noise in favor of the cool air. But neither of us got much sleep.

On Sunday we headed off to Walmart to get a nice, shiny, QUIET new one. But we still haven't figured out all the modes and stuff, so last night I think it was on fan most of the time. Yeah, I need to find and read that manual soon.

Then there is the impending surgery The Snarky Teen will have to undergo in a few weeks to straighten out her oh-so-crooked spine. If that doesn't keep you awake nothing will.

The Louisiana High School baseball playoffs began this week. Tomorrow, my husband's team, the Destrehan Fighting Wildcats will take on the Byrd Yellow Jackets in a bi-district round game. So, right now, I'm upstairs ready for bed. He is still downstairs.

And I can picture him right now. He's sitting at the computer with the Class 5A bracket on the screen. He's chewing on his thumbnail, spinning back in forth in the desk chair, half watching the MLB channel as he imagines every possible scenario that can play out over the next two weeks. He's figuring out who will pitch tomorrow, then the next day, then the next. In his mind, he's playing it all out, right up to the moment when he gets to hoist that golden trophy.

We have this running joke between us about our mental bases being loaded. There was this one time when I was stewing with the weight of the world on my shoulders and he wanted my attention. "Listen, Bud," I said. "What would you do if, in the middle of a game, when you're down by 2 and have the bases loaded with two outs, I marched right up to you in the third base coach's box and demanded your attention? What would you do?"

He got the message. So, if I say, "My bases are loaded," he knows to back off.

It's not that we haven't been here before. This is his 14th season at Destrehan. His teams have made the playoffs every year. Twice his teams have played for a state title. In 2004, his team won 30 games in a row.

But this year is different.

While, right now, there is a tomorrow (and a 60 percent chance of rain), tomorrow there may not be one.

I'm thinking he's going to take one look at my Honey-Do list and go volunteer to coach somewhere.

But what this means is, if he loses tomorrow (knock wood), he's done. There will be no next game. There is no Next Year. It's all over.

Lots of people are hoping he does. The state championship is the one thing that has eluded my husband in his storied 25-year career.  Well, that and a winning lottery ticket.

So, from our nice, cool, quiet bedroom where I'm about to go to sleep, I'm sending my husband a message:

I was standing in my kitchen the other day working on dinner when my daughter brought a new friend in to say hello.

She isn't one of my daughter's classmates, not one of the kids who rides the same bus. She doesn't even live in our neighborhood. In fact, she doesn't live in our state.

My daughter's new friend Sydney lives somewhere in Ohio and she came into my kitchen last week via Facetime on my daughter's iPhone.

Lora and Sydney, who met through a mutual friend, have been talking for weeks (which may explain our many data overages recently). I don't know what all they talk about. I think they mostly watch reruns of "The Office" together, but I know Lora has given Sydney a complete tour of our house and both our front and back yards. And Sydney recently took Lora on a little trip to New York with her choir group.

And let me assure you that I have done my due diligence as a mom. My daughter knows not to give her full name or address to anyone she meets on the Internet. And we are reasonably sure that Sydney is not really some 65-year old pedophile from New Jersey. I did speak to the girl on Facetime and see her actually moving. Still, when Sydney offered to send Lora a souvenir from her trip to New York, we told Lora to have her mail it to her dad's school instead of our house, just because.

But it's also pretty cool. My kid got to have a friend over to watch TV with and I didn't have to feed her.

Actually, this is the thing these days. While Lora has had the obligatory slumber party or two for birthdays and whatnot, most of the time she and her friends just hang out on Skype, or one of the many alternatives now available on their laptops and tablets. Because they all like to draw, they like to use the "Share Screen" feature, which allows them to show each other their creations. They can even watch TV and movies -- together. I often hear them giggling and laughing with each other from my daughter's room.

Now, as a mom, there is much to like about this new fangled trend:
One:  I don't have to feed them.
Two: I don't have to clean up after them.
Three: I don't have to stay up all night with them.
Four: There's much less drama when girls aren't all in the same room. Fewer feelings get hurt.

Give me a few more minutes and I'm sure I could come up with a couple more, but you get the idea.

It is! Why, just the other night I realized that I had carried my weary body up the stairs and crawled into my bed without stopping in my daughter's room to say goodnight! So what's a weary mom to do? Why, she Facetimes her teen-with-an-iPhone! That's what she does! I really did. I called her and told her I loved her and wished her good night and made silly faces. I even let her dad say good night.

She was duly mortified. (Winning!)

But wait. She's going to be dating someday, isn't she? Boys have computers and cell phones and Facetime too, don't they? Someday, I'm going to walk in her room and there will be a BOY in there. Won't there? How exactly do you chase a boy out of your daughter's room when he isn't really there? Or, she could bring him to "meet" me when I've just gotten out of the shower or something. That wouldn't be good either.