As much as I love birthdays, sometimes they do make us want to turn back the clock.

I mean, I can put up with the lines and the wrinkles, but I really hate the little dots that start showing up all over the place. The aches in the feet. The pains in the hips. The bad eyes and the finicky digestive system.

And what I wouldn't give for hair that stays one color or for eyebrows that just stay (what the hell is up with that?)

Actually, it was a Studio 54 Party.

I just kind of threw it out there to the Coach on the way to dinner a few weeks ago, as we were mulling over the idea of a backyard barbeque or a fancy dinner out to mark the occasion.

He smiled. Then he smiled wider. He was down with it.

In case you're too young to remember, Studio 54 was a very famous disco in New York City during the 1970s. It was THE hot spot for movie stars, rock stars, groupies and famous nobodies (like the Kardashians). You just had to be one of the "beautiful people" to get past the velvet rope.

Well, that wasn't necessarily the case at our Studio 54. We let everybody in because they were all my beautiful friends and family members, some of whom spent the day at Goodwill searching for an appropriately tacky 1970s outfit to wear.

Lora and I went to our local thrift shop over the weekend. She found a lovely black velvet dress that could have been in fashion in the 70s but was just as cool today. She bought it for $3.

I lucked out and found an all-in-one pantsuit that I think had been there since the 70s. It had a halter top and wide flare legs and gold studs all around the draped neck. It was perfect and it was on the $5 rack. Of course I had to pay extra -- $7 -- because it was all-in-one, the clerk said. Yes, I got ripped off at the Goodwill Store.

I eschewed the platform shoes, however. Having actually worn them in the 70s, the 80s and most of the 90s, I can no longer feel my little toes and have some spurs growing in some joints. I elected to wear big, clunky sandals instead which is good considering I walked about three miles on this day doing party prep. I did search for roller skates. Those might have helped.

My friend Kristal found a nice silky, polyester shirt which she paired with her favorite flare leg Yoga pants and a pair of big, clunky animal print shoes. She could barely walk the next day.

Lisa found herself a sexy dress and some sexy black boots. "I wanted white ones but beggars can't be choosy," she said. "If I had time I would have tried to spray paint them."

My friend Daniell went but got discouraged when she couldn't find anything. I told her just to buy a mullet dress -- you know, one of those dresses that is short in the front, long in the back. Those were a staple of the 1970s. I wore one to my prom in 1978. And in 1979.

Sadly, they made a comeback just a few years ago. Daniell had one in her closet.

I really tried to get The Coach to come as a 1970s Coach with the Bike coach shorts, the white tube socks and a trucker hat. He opted for the lounge lizard pants and sweater vest instead.

A few just showed up in tie-dye.

Of course we all wore blue eye shadow with glitter and kohl eyeliner and lots of mascara and tied things around our heads. I moved my usual part from the side to the middle and gave myself some "wings." Everyone says I should leave it like that. Hmmm.

Then there was my nephew-in-law who pasted on bushy black sideburns and chest hair.

We drank Boone's Farm wine and sang like the Bee Gees and boogied to the beat. But none of us could remember exactly how to do The Hustle.

Hey. We're lucky we could remember the 70s at all.


And my husband bought me a disco ball.

What more could a 54 year old woman ask for? 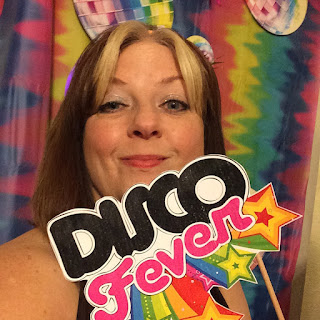