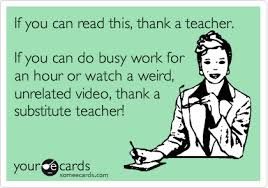 I used to love to play school when I was a little girl.

My grandparents, who lived in the house next to our little trailer home, had a black chalk board in their little red kitchen and just about every afternoon I would come home and pretend to be whatever teacher I had -- Mrs. LeBoeuf, Mrs. Dupont, Mrs. Pellegrin, Mrs. Smart.

Not Miss Theriot. She was a mean ex-nun and the toughest teacher I ever had (probably the best, truth be told, but it took me years to admit that.)

Grannie and Grandpa were my favorite students, of course. They were smart, polite and never talked back and, like any indulgent grandparents, they did their lessons and took their little tests with no complaint.

But I didn't grow up really wanting to be a teacher. My dreams were to be a writer, a journalist, a documentary film maker and, for a brief moment, a concert pianist.(Grannie and Grampa had a piano too.)

It wasn't until I was a few years into my lenghthy stay at  Loyola University when I entertained the idea of teaching. I loved the the idea of my own book-covered office with my degrees on the wall and standing before a group of attentive young adult extolling on the virtues English literature and grammar. So, I changed my major from Communications to English and enrolled in the Secondary Education program.

Fate took me on another path, however, when shortly before my finished my seventh year at Loyola (don't ask), I was hired by The Times-Picayune newspaper and embarked on a 26-year career in sports writing.

Then I got laid off.

With newspapers not hiring so much these days and my with my resume woefully short of marketable skills other than writing (and pool floating), I decided to join the family business.

Since February, I have been working steadily as a substitute teacher in our local school district -- mostly at the same school where my husband currently teaches and my daughter is currently a junior. It's also one of the schools I routinely cover as a freelance sports writer. (No. Not awkward at all.)

I did not sub for any of my daughter's classes at her request. I did see many of her friends I've known since she was in kindergarten.

And, let me just say, it was a learning experience!

I learned a whole lot about teachers and children and teenagers over the past few months, and a little bit about my husband -- mostly that he is never where you think he will be when you need him. Also, that he skipped the lessons about cute bulletin boards and classroom decorations. "It is what it is" is on a poster on his wall. And it is.

Oh he's not the only one. Some teachers have desks piled with papers (where they like to hide the sub lesson plans) and others have different cups for different types of pens and leave you a color coded binder. Some teachers are very, very clever, from their bulletin boards to their classroom decorations to their lessons.

You can tell more about a teacher by how their students react when they see the sub. Some are thrilled -- "Yay! We have a sub today!"

Others, not so much. "Great. We have a sub. That means we won't be doing anything today," was an actual response. Sorry to disappoint you, kid.

You also can tell a lot about a teacher by how their kids behave for the sub. While one or two actually sit down and do their work without a single word, some classes just turn into a zoo. And in that zoo, you will see:


These are the high school kids. I only ventured into elementary and middle school a few times -- too scary -- where I learned that fourth graders will tell you everything you need to know and watch out if you try to change anything. The have a routine, they know it and they expect you to stick to it.


You learn a lot of things, like, high school kids are really smart. A lot of them are planning for their futures and know exactly how to go about it. I listened one day as a group of young men critiqued their teachers for their own lack of skills and discussed whether college or technical college would be better for their futures and - - complete with salary scales. Then they discussed whether it was better to go into the Army or Navy.

There were other life lessons.

I learned that teenagers have tiny little bladders that need emptying frequently.

I learned that kids are very sleepy and need naps during the day.

I learned that it's really hard to kill 90 minutes but a 30 minute lunch break speeds by.

I learned that it really sucks to watch three-fourths of a movie three times in a day because then you have to rent it that night to see how it ends.

I learned why my daughter leaves the house every day dressed for winter even when it's 95 degrees outside. Schools are freezing. Someone told it me "it keeps them awake and still." I don't know about that.

I learned why schools are so against kids having cell phones in the schools. As a parent, I do want my child to be able to call me if she needs me, especially in these trying times. But as a teacher, cell phones are evil. No matter what you try or how many times you try, you can't keep them off of them.

I learned just how special the special ed kids are. I spent one whole day as a para to a young man who is non-verbal. We worked on skills, we went to lunch and we spent a glorious spring afternoon watching his schoolmates play cabbage ball. I asked him several times if he wanted to go inside, but he shook his head every time. He loved it. And it broke my heart to know that when he goes home, his mom can't ask him "What did you do today?" because he can't tell her.

And yes, I learned that it's very, very scary to be a teacher. You do look around the room to scope out places to duck, to hide, to be safe. You realize that schools are built for efficiency and storage, not for security. That, despite best efforts, schools are very easy to get to and into. I've been doing it for decades as a sports writer. No one ever stopped me.

I learned that there is nothing in the world more terrifying than an active shooter drill, when you're cowered in the corner of a locked classroom and someone rattles the door -- except knowing that, somewhere in that same building, your child is experiencing the exact same thing.

And I did learn that, despite all of the above, there is a desire in me to teach. My favorite day was my first, when the class was assigned to read a section of "Beowulf" (my favorite!) and answer questions. Most of the classes preferred to read silently, on their own. But one said it was boring and why didn't I read it to them. I did. I loved it, they listened and they GOT it! Go me!

I would love to teach "Beowulf" or "The Great Gatsby" or, better still, the merits of good journalism, even to The Wanderer, The Preener, Kings and Drama Queens.