I knew my days as a caretaker were not over after my mother-in-law, Hurricane Jane, passed away in February of last year.  And after we all survived my daughter's harrowing spinal fusion surgery. And after The Coach got his knee replaced.

I knew I wasn't done.

I knew I still had Mama.

But Mama is no Jane. While Jane had a long list of medical problems  -- and an even longer list of medications -- when she came to live with us for the last time in 2012, Mama is an 82-year-old spitfire of a woman. Yes, she has high blood pressure. And a bout with Rheumatic Fever while she was pregnant for me in 1961-62 left her with a leaky heart valve. But while Jane rattled when she walked after taking some 20-plus pills every day and night, Mama takes one or two and goes on her merry way to the French Quarter of New Orleans.

Several years ago, my Mama found herself a full time job working as a Tarot card reader at The Bottom of the Cup Tea Room in the French Quarter. (She isn't one of those wacky folks who sets up a table on the sidewalk.) And she has done wonderfully in her fourth or fifth career. She has built a steady following with her talents, and even earned a few TV spots with her eccentricities. 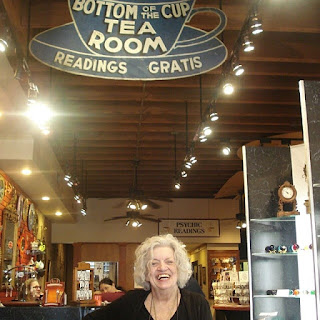 She always wears black. Nothing but black. And lots and lots of jewelry.

She also has made a bunch of new friends -- the lady who makes pralines at Laura's Candies, the lady who sells shoes at Feet First and the guys who park her car at Harrah's Casino. They love her. They park her car right out front.

Those who know her are in no way surprised by any of this. Mama has always been able to reinvent herself. She has been a lifeguard, a bookkeeper, an office supervisor, a barmaid, a restaurant hostess, a bar manager, a hotel manager, an artist and an art teacher.  Now she is a New Orleans character.

But over the past few years Mama has started to slow down. That leaky heart valve and the too many packs of cigarettes over the years are starting to take their toll. She's had a few bouts of pneumonia and anemia. With much drama and flair, we make the trip to the little Hospital on the Hill in Kenner (whoever decided to build a hospital on a hill needs to be seriously drugged). With much drama and flair she tries to explain to the doctors and nurses what's bothering her. With much drama and flair -- and a great deal of pride -- she tells them, no, she is not home bound she still drives and works. In the French Quarter. Every day.

Her resilience is extraordinary. It was just a few months ago that her shortness of breath necessitated a trip to the hospital by ambulance. When I arrived a few minutes later, I was informed by a very nice doctor that my mother had stopped breathing on the ride, but that they managed to get her back. I was gently urged to gather the family, those who wanted to see her one more time. One by one, my sister, my nieces and nephews arrived in the middle of the night to see their "Nana" in the emergency room.

The next day she was moved into a regular room.

The day after that, she went home.

A few days after that, she went back to work.

But for the last week Mama has been felled by some mysterious illness. No fever, no aches, no pains, no shortness of breath. She just doesn't feel good.

So she has spent the past week in my spare bedroom, being pampered and primped and waited on hand and foot -- by my husband -- and fighting night and day with me while I try to get her to eat, drink and get out of the bed. I suck at it, though. I'm "mean," she says. He is sweet, she says. I think she's faking, she says. He takes good care of her, she says. And he really does.

It's funny. When Jane was alive, she and Marty fought like crazy. They could hardly stand to be in the same room with each other without screaming and yelling. Neither had the patience for the other.
Now, it's the same with my mother. Rather than get yelled at for doing it wrong, I just let go and let him. It works.

I know she hasn't fought her last fight.

So now she is in Baton Rouge, fighting with my sister. But I'm sure she'll be back.