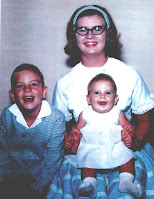 She had more names than most members of the royal family, starting with two first names and accumulating the rest from a Catholic baptism, two dads, and five husbands. Born in the last year of the 40s, she grew up in the 50s, was a teenager in the 60s (who got to see the Beatles live in New Orleans), a mom in the 70s, a divorcee in the 80s (a couple of times) and finally settled down in the 90s and 2000s as a hot shot real estate agent.
Nothing came easy for her and certainly nothing stayed easy. She had chips on her shoulders a lot of times and not much of a filter. A Scorpio through and through, she sometimes had a harsh sting. She wasn't cuddly. She wasn't always easy to love. But she was my big sister until I lost her in early December. It was way too soon for us but put an end to a long time of pain and suffering for her.
She got a brief little obituary on a funeral home website, but no funeral -- yet. One day this summer her husband Nick and I and whatever family chooses to gather will send her off the same way we said goodbye to Mama, on the banks of the Mississippi River. But since I have this little space and a knack for words, I figure I owe it to her to remind the world that she was here for 73 years and 44 days.
Officially, she was Jo Lee Ann Delanuville Lyons Saunier Miller Catton Bonura LeBlanc. But, to me, she was just Sissy -- my much older, wiser, grumpier, hell-hath-no-fury sister.  She was born to a teenage mother who didn't have a clue what she was doing, but, thankfully, there was a set of grandparents there to pick up the slack and make sure she survived. Mama named her after her own grandmother, Lena Josephine, but reversed -- Jo Lee. Back then, you had to have a saint's name to be baptized, so Mama added the Ann.
Her father, a Navy man, came and went in a flash. Then my dad came along and she started using his name because no one could spell the other one (Still can't. It's even wrong in her obituary.) Then she got married. And again. And again. And again. And again. But she kept the name of her third husband because it was the one she used to establish herself as a hot shot real estate agent in Baton Rouge. She also refused to be called Jo Lee LeBlanc. It was too much like the Cajun song Jolie Blanc.
She became a big sister to our brother, Rhett, when she was 7 years old and spent the next several years trying to keep him alive. You see, Rhett was a bit of a daredevil who lived his life on the edge, even as a toddler. It was Sissy who interrupted mom's card game to inform her that Rhett was on the roof. "Tell him to get down," mom replied calmly, knowing if she went out there she would scream, scare the bejeezus out of him and probably make him fall. He got down safely on his own.
She had six more years before I came along and I'm certain she was not thrilled when mom and my dad announced my impending arrival. I was kind of an oops baby, conceived shortly after my mother recovered from a serious bout of rheumatic fever that nearly killed her and left her with a profound heart murmur. 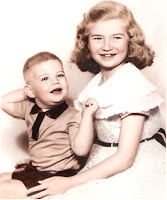 Two weeks after I was born, Mom and Dad packed the family up in the station wagon and moved us all to Houston for Dad's new job. I, of course, have no memory of this time. I have heard stories of bike rides to Blueberry Hill and the daily adventures of my brother. There are a few photos of Sissy and me, in which she is acting like the Mother Hen, fussing over me or dressing me up in some silly costume. All I know is, when we moved back to Houma two years later, my parents were no longer married. 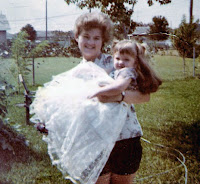 We moved in with Grannie and Grandpa for a time until my Gramps bought us a nice new trailer to put on the lot next door. Mom, Rhett and I moved in, but Sissy stayed in the added on back room at Grannie's. I have so many memories of that room, all filled with 1960s nostalgia. She had the little white record case filled with 45s of the Beatles, Elvis, The Monkees and other hit makers. She also had a stack of albums. She had cat-eyeglasses for the longest time and big, poofy hair. She had a best friend named Twig, who sort of looked like and was nicknamed for the super skinny model, Twiggy. 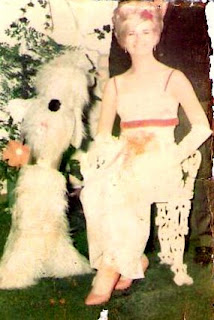 One of the main things everyone remembers about my sister was that she was double-jointed in her knees. When she stood up a certain way they would bend backwards unnaturally. She also could Hula Hoop like a mad woman.
When she got a boyfriend in high school, they used to sit in our tete-a-tete swing and I would go bother them in little sister ways. I remember being heart-broken when she left for college, not knowing it was just a short ways away in Hammond. I remember her calling to tell us that it was snowing there and I wished it was snowing on me too. She lasted only a semester or two as a Home Economics major -- back when there still was such a thing. Like a good 60s girl, she was a master at cooking. 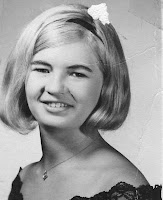 I was only 6 years old when she married her first husband, in a hurry-up post-Christmas event after he joined the Marines but before he was stationed in San Clemente, California. They married at our local Catholic church, which we attended very infrequently, and they had always told me there was no bathroom there so it really wasn't my fault that I peed on my mom's new boyfriend's lap. I was the flower girl, and Sissy and I were dressed in identical white crepe miniskirt dresses. She really did look lovely. I was cute. (I can't find the photos though.)
Rhett, Grannie and I went to visit her and Lou the next summer, even though I was terrified of getting hijacked. (Y'all don't believe me when I say I watched the news my whole life!) My brother, in his wisdom, told me not to worry because, if we got hijacked, it would be on the trip home. So I refused to fly home. I spent the whole summer with Sissy and Louie, going to the beach and eating Jack-in-the-Box burgers. They made me stay up to watch the Lunar landing. But they also took me to see The Blob and I was afraid to turn on any faucets for days.
When it was time to come home, we drove -- from California to Louisiana in a Chevy Nova with no air conditioning. I didn't know she was pregnant at the time.
When I was two days shy of my eighth birthday, my sister gave me the best birthday gift ever -- a real live baby doll in my nephew, Lee. I was in love at first sight and he and I grew up much like a brother and a sister. My nephew Beau came along a few years later, but he attached to my Grannie. Lee and I were almost inseparable for most of our lives.
Life got hard after that as her first marriage broke up. She went up and down in weight, causing a myriad of issues for her. Then she went up and down in love, through husbands and stepchildren that came and went through our lives like butterflies.
She ran an apartment complex for a while and hired me to be the pool sitter to make sure only residents were there. I got a great tan out of it.
Eventually she moved to Baton Rouge and started talking with a "southern" accent. 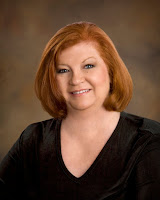 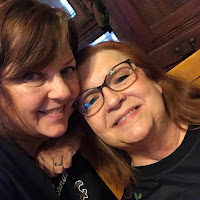