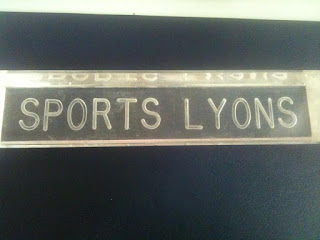 On the day that the Men in Ties removed me from my post as sports writer and moved me to Bitter and Bored Clerk/Receptionist/Crime Reporter at The Times-Picayune, I posted the news on Facebook with a simple: "I am no longer a sports writer."

Soon, dozens upon dozens of my friends, family and peers were there to express their shock and anger, then to offer their love and support. And more than a few told me, "You will always be a sports writer."

I guess they were right.

After the TP unceremoniously dumped me and 199 or so other souls in 2012, I set myself up to be a freelancer -- as in, freelance sports writer. And over the past three years, I have had pretty steady work covering games and writing features for anyone who would ask me, namely The New Orleans Advocate, The St. Charles Herald-Guide, Riverparishfootball.com, Sportsnola.com even The Shreveport Times. I even wrote about black market trees for Louisiana Forestry Magazine. It kept me in the game (so to speak) as I sent out resume after resume and my 401K dwindled to nothing.

Even when the library called, telling me they had checked me out and would I like to come work for them, I kept my night job. After 8-hour shifts at the library, I would make my way to football games on Fridays and, somehow, managed to stay awake and alert enough to write up a story and drive home.

Then I got an email from a guy at a newspaper. He was looking for a new sports editor. Did I want to talk?

What do you think?

And after the conversation was over it came down to this: "I just can't make any less money than I do now working three jobs."

So two weeks ago, with half a tear in one eye, I informed the lovely ladies and one gentleman at the library that I was checking out. When I told them why, not one batted an eye. Even in the short time I was there, they knew that, in my heart, I was a sports writer. Always have been. Always will be.

Actually, now I am a SPORTS EDITOR (cool, huh?) On Monday morning I will join the staff of the L'Observateur newspaper in LaPlace as its Sports Editor. I'm back covering sports. Full time. In the same place I spent 21 years covering high school sports -- but only half the teams this time.

And just as it was 15 years ago, the response has been overwhelming. But positive this time. People are happy for me and happy to see me again. And I them.

It has been a long, arduous journey from there to here. From prep writer to perp writer to freelance writer to caretaker for cantankerous old lady to wedding invitation writer to slow public relations writer to library lady.

The last three years have been utter hell -- as these blog posts can attest. The doors and windows everyone said would open, didn't. There wasn't much call for a 53-year-old woman who could write real well and parallel park like a champ but had no retail experience. The World War II Museum, East Jefferson Hospital, Nicholls State University, Nunez College, Loyola University, Barnes and Noble -- all said. no. Or nothing at all. (Loyola did give me a very nice part time temporary freelance job which helped me keep my cars.)

There were times I wanted to just quit, give up and run away. There were times I felt so low I didn't think I'd ever be able to climb up again. Fortunately, I have a husband who kept scraping me up and lifting me up in his belief that, it could only get better. It certainly couldn't get any worse.

So I begin this new adventure with high hopes and the love and support of my friends, family and peers.

And I couldn't be more grateful.


Read the announcement here at the L'Observateur