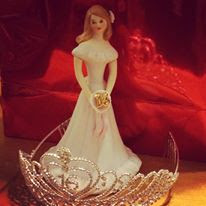 As much a fuss as my mama made over all of my birthdays growing up, I have to say she let me down on my 16th.

I wanted a party. A big, fancy Sweet 16 party with lots of people, friends, balloons and a big ass cake.

I didn't get that.

I did get a cake, and a couple of friends and I went to the big hangout at the time -- Shakey's Pizza Parlor. I had invited a bunch of friends from school, but not many of them came. I ended up offering my cake to other diners and their kids.

When my stepdaughter, Courtney, turned 16, she got the big fancy party. She and some of her girlfriends who were having March birthdays got together for a big party with lots of people, friends, balloons and a big ass cake. They wore long dresses and got to dance with their dads. It was sweet.

Knowing her the way I do, I gave her the option: Do you want a big party or a trip somewhere fun?

She wanted a trip.

OK. Where to? The beach? New York? Somewhere historic?

And she wanted to spend her day in Epcot.

So, after consulting with a cousin-in-law who used to be a sports writer but now is a Disney travel specialist (smart guy), we booked ourselves a 3-day trip to Orlando.

Oh, this wasn't our first Disney rodeo. We took her when she was 4, then again when she was 9 and 11. Keep in mind, my stepdaughter worked as a Photopass photographer for a few years, so believe me when I say we've done Disney. I also went with my mom and my niece way before I met any of current family members.

So I've stayed at the Grand Floridian, All Star Movies, All Star Music and the Caribbean  Beach Resort. I wanted my budding little artist to have a turn at the Art of Imagination Resort, but they were booked. We had to settle on Pop Century, right across the lake.

She still was excited. She started packing on Sunday, bringing out pairs of outfits for the Coach and me to choose between. (They all looked the same to me). We also had to go to Bed Bath and Beyond so she could buy travel sized items of all the things she couldn't live without.

And I went to Amazon.com and ordered her a beautiful tiara, complete with a rhinestone 16 in the center. If you're going to go to princess land,  you must dress the part. Right?

On a Wednesday afternoon after school, we set out from New Orleans to Florida, stopping for orange juice at the official welcome center. We even let our newly licensed driver have a (very brief) turn on the highway -- not realizing that particular stretch would turn out to be completely under construction with absolutely no shoulder. It also was my first time as a passenger with her behind the wheel.

After about six hours on the road, we stopped for the night at a little hotel in Lake City, Florida, where I learned how difficult it is to share a small hotel sink and counter space with a teenager who spends her days and nights watching makeup tutorials.

We survived that too.

On Thursday, January 26, I woke up to having a 16-year-old daughter snoring in her bed next to me. We woke her up with song and hugs and kisses, only for her to complain about how loudly WE snored in our bed next to her.

After a breakfast at the local Waffle House, we drove the remaining few hours to DisneyWorld. Thanks to modern technology, we didn't even have to check into the hotel. We parked the car by the shuttle, hopped on board and, within minutes, we were in Epcot.

She wore her crown and received a birthday button at the front gate. We spent the day strolling from country to country, dashing in just about every store and having people from around the world wishing her "Happy Birthday."

We ate fish and chips in England, had French pastries and champagne in Paris and (her choice) Japanese food in Japan. 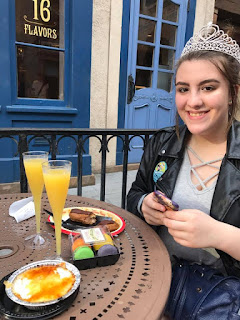 And it was, truly, magical. Friday we went to Magic Kingdom and Saturday we spent a small fortune visiting the Wizarding World of Harry Potter. We even caught the Pro Bowl parade, which is another story (you can read it here... I wrote a column about it.)

Even as we were making memories, I was surrounded by them....

Her face when she saw the princesses on the castle stage for the first time....

When she saw Mickey and Minnie....

When she was the little girl dressed in her Cinderella costume sound asleep in her daddy's arms after a long day at Magic Kingdom....

When she was getting autographs for her book....

The moment she balked at getting onto the Hogwarts ride a the last minute (Hey! Those warning signs were scary!)

Now she's nearly a grown up. She doesn't believe in the magic much. She believes in Netflix, Lush, Sephora and Etsy. She refused to get on the Small World ride because it's "creepy," and she almost refused to go on Splash Mountain. And we never saw the Magic Kingdom fireworks because she was tired and ready to go.

And Coach and I can go to DisneyWorld all by ourselves.