Throughout the land where I live, there is a party going on. A really big, really loud, really long, really good party.

It's Mardi Gras time in New Orleans.  Actually, it's Carnival time. Mardi Gras isn't until Tuesday -- the day officially known as "Fat Tuesday." That's the day before Lent begins,  so it's supposed to be the last day to indulge in all your sins. And some people do. All of them.

But nobody around here calls it "Fat Tuesday." Here we call it Mardi Gras. Prounounced "maw-di-gra." Rhymes with "bawdy bra." Which is rather appropriate when you think about it.

Anyway, the people of my land are in full party mode right now. Everywhere you go, people are dressed in colors that don't really go together, wearing accessories that they would never otherwise wear -- like ugly plastic necklaces -- they're putting on silly costumes, disguising their faces with masks and makeup, and getting ready to dance in the streets and do other things they wouldn't even think about doing in, say, April. Some others will be taking much of their their clothing off.

And we've been doing this for weeks now. Thanks to a little game called THE SUPER BOWL, New Orleans had to split the Carnival season this year into pre-game and post-game, with a little break for The Game in between.  But really, that just meant an extra week of partying. And hangovers.

This weekend the real fun kicks in, with five straight days of Carnival shenanigans leading up to Mardi Gras Day on Tuesday.

And my people are are ready. 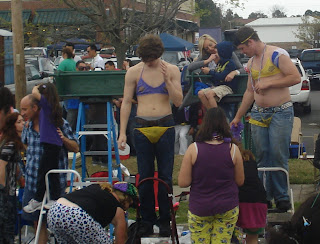 But first they have to stake their claim to unoccupied patches of grass, or a few square feet of sidewalk. Some will pitch tents, bring out barbeque pits and pretend to be homeless for a couple of days. Some will take their precious children from their state of the art car seats and perch them atop rickety ladders 10 feet high in the air on top of concrete, feed them cotton candy and caramel corn all day and let complete strangers throw things at them. Hard things.

Over the next few days millions of people will drink massive amounts of alcohol from stupid looking cups, only to puke it up later. And millions of chickens will be sacrificed.

And everybody will be peeing in the bushes.

That's what we do here in Louisiana.

Well, that's what some people do. Not me. Not us. When God finally took pity on me and sent me my chosen child via the little town of Dulac, Louisiana, he sent me the one kid who abhors Mardi Gras parades, has no desire whatsoever to go.

Me: "Do you want to go to a parade tonight?"

My mama: "I can't believe you haven't dragged your child  kicking and screaming to a parade. You're missing everything. You never missed anything."

She's right. I didn't miss a thing. I've done Mardi Gras in Houma, Thibodaux, Metarie, Luling and the big city of New Orleans.  I've marched in them and waited for them. I've done Bourbon Street, St. Charles Avenue, Mid-City and Canal Street. Once I walked from Carrollton Avenue to Bourbon Street. In a day.

I've shared sidewalk and beads with the Hell's Angels. I've camped out on the neutral ground. (Well, we tried. We ended up sleeping in my car.) I've had a rider give me champagne off the float. I've caught beads off of balconies and been asked to flash -- to which I replied, "Uh uh, hon. You want to see these, you've got to buy me dinner."

I bumped into Don Johnson on Bourbon Street, saw Dan Akroyd at the Camilia Grill and got drunk at Pat O'Brien's with some judge from Boston. I spent one whole Mardi Gras with a friend who had great fun flashing her "As" all over Bourbon Street, then watched her as she filled my bathtub with all her loot to take a Treasure Bath. I've made out with strangers, fell in love with a Buzzard, peed in the bushes and thrown up in them. And I've caught more beads than I ever knew what to do with.

But the fact is, Mardi Gras isn't for everybody. Sure it's fun if you're a little kid whose parents perch you atop one of those rickety ladders, and feeds you cotton candy and caramel corn all day, and buys you a light up feather boa and a half a dozen cans of silly string, and screams and yells until strangers pick you out of the crowd and toss you a beer soaked teddy bear that your parents are going to throw away as soon as you get home.

Or if you're a young, hot, chick with DDs who strangers will pick out of the crowd and toss you a beer soaked teddy bear -- if you promise to show him your tits. Or you have a friend who will show hers.

Or if you're a teenager with a posse and your parents trust you enough to let you run up and down the streets with them so you can go find the dudes with the fake IDs who can buy you beer, and he's standing right next to the hot chick who is flashing her tits at the guys on the float.

Or you're a tourist buried in snow in Boston, who sees snippets of all the R-rated fun on TV and you're enthralled and keep promising yourself, "Someday I'm going to go to the Mardi Gras." 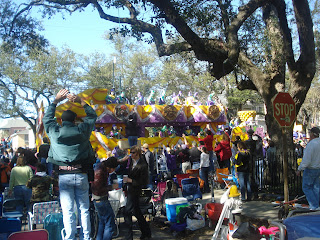 Or if you're one of those guys on the float who paid three months' mortgage to join the club and buy the costume and the beads and the plastic swords and the spears and the teddy bears and the beer to soak it all in.

Or if he's your brother-in-law.

Or Mardi Gras happens to fall on your  birthday. 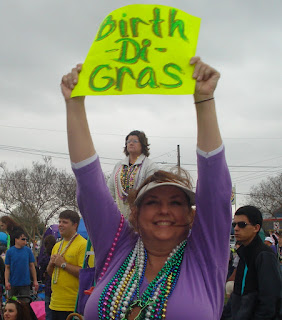 But if you're a grown-up person who worked all day (or takes care of your mother-in-law all day), it's kind of a pain to load up the car with jackets and ladders and a cooler full of beer for you and soft drinks for the kids and the big box of Popeye's fried chicken, red beans and rice and onion rings and the wagon to put it all in.

And then you have to fight the bumper to bumper traffic into town, then find a place to park. And then  you have to find a place to stand that's NOT next to the hot chick who's flashing her tits. And then  a safe place to pee because you're going to be out there for two hours freezing your ass off  waiting for the parade because one of the tractors is going to break down or one of the drunks is going to fall off the float. And then you have to carry all your loot back to where you parked -- if you can remember where you parked -- and maybe your car will still be there.

But  if you're just a tween who has outgrown the cute factor, who has to stay with your very uncool parents, and who doesn't pay enough attention to duck when a five-pound bag of bead sails towards your  face, and who doesn't really have tits yet,  Mardi Gras can be pretty scary.

I also know that one day a carload full of kids is going to pull up to my house with Big Chief blaring on the stereo  and  an oversize ice chest hanging out of the trunk. And she'll want me to let her get in and go off with these hooligans to who knows where to do who knows what.

And I probably will.

It's Mardi Gras. Everywhere else, it's just another Tuesday. 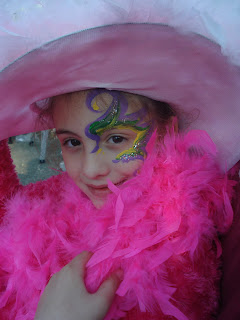