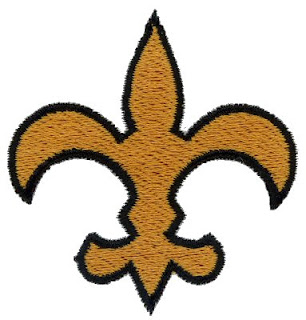 Flags are flying from houses, from car windows. People are installing flag poles just for the occasion.

People are shoe polishing their own car windows.

And grown women are wandering the aisles of Barnes and Noble wearing football jerseys. On a Saturday afternoon. The week before Mardi Gras.

There is definitely a phenomenon going on.

It's called Who Dat Fever, and the city of New Orleans certainly has it. So do the suburbs.

On my street alone there is a house with Who Dat spelled out in Christmas lights, there are several "Who Dat Nation" yard signs and a giant plywood Who Dat adorns a front lawn. Then, the local A/C repair company installed a giant flag pole yesterday -- to run up a Saints flag.

I even have my own little Saints shrine in my front window.

Yesterday I saw the gas man in his Saints jersey and he didn't stand out at all. So are all of the shoppers in the grocery store and all the kids at my kid's school.

And every woman in the city owns at least one Fleur de Lis piece of jewelry.

A drive to the city today was like being in a summer all-star parade. Shoe polish doodles spell out "Geaux Saints" and "Who Dat" on every other car window. Those that don't have either a Fleur de Lis decal on the back or black and gold flags flying from the windows.

The New Orleans Saints are in the Super Bowl for the first time ever, and it is an amazing experience.

We are savoring it. Every second of it. Because it took us 43 years just to get here and we know not if we will pass this way again. People we know didn't live to see this. Will we live to see it again? Is this truly an historic event?

It certainly is for the Who Dat Nation. I have friends in Miami for XLIV, co-workers and colleagues who are writing their dream stories for their papers and their blogs and their networks and us fans.

I have friends in Miami who scored dream tickets to the dream game.

I have friends in Miami who are just getting drunk.

And we likely will be.

But we've been crying for 43 years, over every loss snatched from the jaws of victory, over every missed field goal, every fumble at the goal line, every Hail Mary pass thrown against us.

But we've been crying for two weeks, ever since that goofy looking little kicker clutched out and kicked the most historic 40-yard field goal in football history, ever since my friend Jim Henderson screamed at the top of his lungs that pigs were flying, ever since we punched our ticket to the big game for the first time EVER.

And we've cried each and every time our brains try to wrap themselves around the thought, "The Saints are in the Super Bowl. OUR Saints."

And win or lose on Sunday, we'll be crying some more.
Posted by Lori Lyons at 1:56 AM