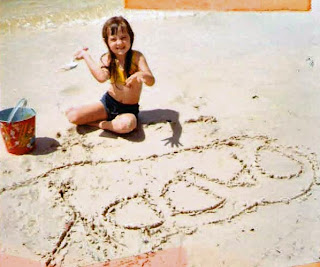 I have no faded photographs of my father holding me as a baby with that look of wonder in his eyes.

I have no memories of those Sunday mornings playing Froggy-In-The-Middle in my parents' bed.

But I do remember him coming and going. A lot.

And missing him. A lot.

My parents divorced when I was 2. I don't remember that either. And that's probably good. I wonder what went through my little 2-year-old brain when, one day, daddy was there and the next he was gone. Did I even notice?

I know I noticed it a lot as I grew older.

Rather than just that guy that was there all the time, telling me yes or no or "Go ask mom," my dad was the guy who made appearances out of the blue and then broke my heart when he left. With that he probably set a pattern for my later dating life. But he also became Santa Claus and the Easter Bunny all rolled into one devastatingly handsome man, who arrived out of the blue, always bearing gifts.

And I absolutely adored him. Or, the idea of him. 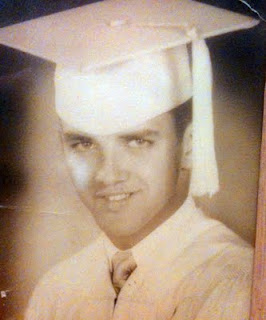 He was the man who traveled the world, sending postcards and beautifully written letters from far off exotic places. And a picture of him holding a real, live koala bear in Austrailia.

He was the man who just happened to be in Mexico where they were filming the movie, "Five Card Stud," and got in as an extra. Later he sent me autographs from some of the stars.

He was the man who came to visit me once or twice a year, bringing me the beautiful china dolls from all over the world and sometimes blankets and maracas from Mexico.

He was the man who called me one day to tell me I would have a stepmother, and later two baby sisters.

He was the man who returned from the Arab nations with his very own dish-dash. He later used it to fool the mayor of our hometown (who happens to be a cousin) into believing that he was a very wealthy businessman looking to pump millions into the local economy.

He was the man who had many, many, many girlfriends the world over.

He was the man who withered in his later years, struggling to breathe from years of cigarettes as his heart got weaker and weaker. He died at the age of 56 in 1989.

He's the man I so wish could have met the man I married, mainly because I think they are so alike. They sure love(d) to have a good time.

He's the man I wish could have met my baby girl and my two stepchildren.

I wonder if he and my brother, who died in 2001, are together now in whatever after life there is. I hope they are watching over all of us and the grandchildren they now have. I hope he is watching over me.

I know he wasn't a perfect man. Certainly not the perfect husband or father. But he was mine. The only one I had. And, like a lot of little girls who grow up to be women, he was my first love.

And I wish he were here.