Coach of the Year

He's known for his withering stare.

Right eye squinted closed, left eye barely open, it is known simply as "The look," to those who have seen it and become well-acquainted with it. It has brought generations of baseball players -- and a few football players -- to their knees.

And then there is that voice. It's a coach's voice. A teacher's voice. Loud. Harsh. Grumbling. More than a little scary at times. It can boom across a playing field, freezing players in their tracks, making umpires think twice before making their calls, letting them -- along with parents and fans -- know when he is not happy with the way things are going.

But neither of those seem to bother his latest team.

If he gave them "The Look," they didn't seem to notice.

He definitely didn't use "The Voice." Not yet, anyway.

Not on a bunch of 9 and 10-year-old girls who make up our daughter's volleyball team -- The Shockers.

This is Lora's third year of playing volleyball. One of the tallest kids in her class, and the daughter of the former organizer of the major metropolitan daily's high school volleyball coverage, it's no wonder she was drawn to it. So we signed her up.

And The Coach, who has spent more time than he probably ever cared to in bleachers watching volleyball thanks to me and my former job, volunteered to be the coach of a bunch of 8-year-old girls who had never played the game before.

It certainly was an experience.

They played bounce ball the first year; real volleyball the second. In either game, it's really all about the serve. Serve it over the net and you're likely to score because teams rarely, if ever, hit it back.

But they certainly did get better throughout the course of that first season. By the end of the season they were almost playing volleyball. At least they were volleying.

We even made it to the championship, losing a hard-fought Saturday morning match to Destrehan. The girls were sad. Really sad -- until they saw the trophy. The really big trophy.  They all ran and gathered around it, each grabbing hold.

"Take it to show your parents," The Coach told them.

And they did. As a group. With grins miles wide. Not a one of them ever letting go as they carefully walked their trophy over to where us parents waited with camera and hugs. 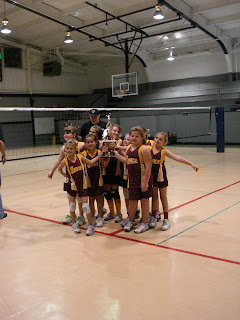 Last year didn't go as well. Our trip to the everybody-makes-the-playoffs was brief. But the volleyball got a little better.

When we signed up this year, The Coach once again volunteered to help. And when last year's coach's daughter got moved up to the higher age group, he got the call.

His first game was three days later. After one too-brief practice.

So Thursday night of last week, while the rest of south Louisiana was wearing purple and gold and watching LSU and Mississippi State on ESPN, The Coach was running around a gymnasium trying to get a group of little girls to listen to him, to follow his directions to hit a big white ball over a net. With their eyes open.

It wasn't too bad. We lost both games, but we scored twice as many points in the second game as we did in the first. And more than once they played actual volleyball. With volleys.


And he never used The Look, or The Voice.

And his little girl was very happy. 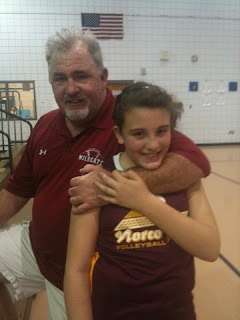 Click here for a chance to win a slot in The Bloggess sidebar for a month sponsored by freefringes.com