More than 300 Friday nights. A few Thursdays and Saturdays. One or two Sundays.

I spent one whole night in the company of a giant banana spider, but didn't know it until I was ready to leave.  Another right beneath a very active bee hive.  And there have been more wasps than I care to remember.

Oh, and the pigeons in the million dollar City Park Stadium.

I've eaten more than my share of chili dogs and nachos and jambalaya and sunflower seeds. And just ask my dentist about the Jolly Ranchers.

I've seen more tiny towns in Louisiana than I ever cared to. Benton. Farmerville. Iota. Cecilia. Avoyelles. Vidalia. Acadiana. Scott --  just to name a few.  Most were wonderful adventures filled with warm, friendly people. And food.

There was the time I arrived in one tiny little town where the temperatures reached the 20s and snow threatened to fall.  I naively told the press box staff that I was in this far off land to cover the visiting team. The home team in the warm and cozy press box promptly pointed at the tiny visiting press box on the other side. I got there and found no room at the inn, thanks to a not-even-local radio station.  Me? I had to watch the game, keep my stats and write my story on top of the visiting press box. In the snow.

There were the 7 o'clock games I had to get to for 3, otherwise there would be no room at all. Games I barely made. Games I thought would never end. Games I didn't want to.

And never a deadline missed. Not a one.

I've pretty much seen it all in 20 years as a sports writer.  Great games. Great plays. Great players -- before they were famous. The Manning boys, Peyton and Eli, back when they were boys. (Sat next to dad, Archie, in the stands when Eli played basketball.) Dawan and Laron Landry. Corey Webster.  Mike Scifres. Ed Reed.

Then the men in ties told me I wasn't any more. A sports writer. I was a crime writer now. And a receptionist. I was benched. And it broke my heart.

But last Friday night, was different.

It was the big rivaly game. Hahnville vs. Destrehan. A series that dates back to 1946. A game I've covered more than a dozen times. One of the ones I had to be there for 3.

But this time, I wasn't in the press box. I was in the visitor's stands. 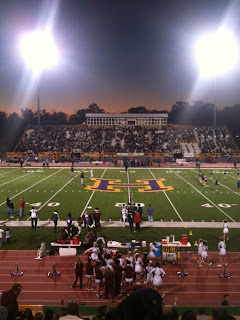 It didn't just hurt my heart, which so wished I would be writing it up for the next day's editions. It also hurt my back. And my hips. And my legs.  It was cold. The bleachers were hard. And I am getting old.

It's hard to admit that, but it's true.  And 20 years of hunching over stat sheets in cheap plastic school chairs or beat up old office furniture that has been exiled to the press box -- or no  chairs at all -- have taken their toll.  The hips and the back are shot. I have a semi-permanent hump in the middle of my back. And bleachers are not my friend.

There have many times over the years when I have wondered how long I would be able to chase teenaged boys. The fact is,  I can't any more. The truth is, I don't want to.

So, last Friday night was my last high school football game. This time, I decided.

The team's season is over. And so is mine.

Next year I'll take the Friday nights off.  Hopefully, The Coach and I will be able to stay home with the new grandbaby my stepson and his wife are expecting. Or maybe we'll go out to dinner. Or, maybe we'll just stay home and play a game with our daughter.

That won't hurt at all. 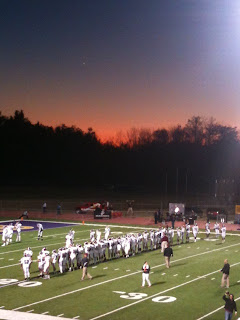 Looking for love at Love Links #30. Vote for me!