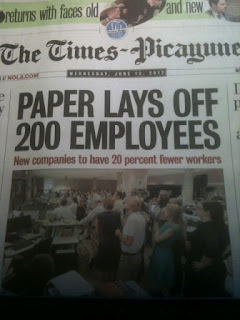 One by one, one after another, my Facebook feed quickly became filled with them. And my heart broke with each and every one.

The age-old code from reporter to editor signifying the end of the story.  On this day, it had a different meaning -- yet the same.

-30- From the crime reporter in New Orleans.

-30- From the education reporter..


And, shortly after noon on Tuesday, June 12, from me.

After 26 years at the storied Times-Picayune newspaper in New Orleans, it took a woman I had known and admired forever about two minutes to tell me that I was being offered a severance. She handed me a big white envelope and patted my hand. Asked if I had anything to say. Any questions to ask. I said nothing. I did my best to hold back my tears.

After 26 years I was no longer wanted, no longer needed, no longer useful. The newspaper is going in a different direction - digital -- and will cut its print run from seven to three in the fall.

And even though I have kept up with modern technology more than most with my abilities to blog and build web sites (four to date), with three Facebook accounts and three Twitter accounts - I do not fit their mold. They offered no explanation.

And thus, the only full-time female sports reporter on the staff until two years ago, when I was summarily moved to clerk and crime (and chief toilet paper orderer), a two time Prep Writer of the Year, was fired. One of five of my fellow sports guys to be let go. One of four in the Artic outpost known as the River Parishes Bureau. One of 200 total.

At least I'm in good company.

My fellow bureau workers were waiting for me outside the plush executive office. One had gone before me; two were waiting their turn. Only one survived.

My husband, who had driven me there, was waiting downstairs in the marble lobby, praying. I rode the long escalator down and handed him the envelope, hugged him and cried.

A few minutes later I went back upstairs to find my nephew, the computer genius I recommended for a job many years ago and who did survive the cut. He was in the cafeteria, among a bunch of press men in blue coveralls who watched us hug, and the men in ties.

Back when I was the young, skinny, single and poor girl in sports, the circulation managers used to invite me to their table and buy me lunch on occasion. I became friends with all of them; dated a few of them; had a torrid affair with another. One tried to fix me up with a brother-in-law.

On this, perhaps my last day in this building, I hugged each one (totally against policy, I might add) and wished them luck. I think they're going to need it.

And then I faced the long ride  back to my office for the next 100 or so days. I returned to my desk. I answered the phones. I typed up the crime for the day. And continued to watch the heads roll, one -30- after another.