Birth-Di-Gras (or, How New Orleans just threw me the best birthday party EVER!)

I heard on the news the other day that this was the first time the annual Mardi Gras celebration -- Fat Tuesday -- ever fell on the 8th of March.

I was worried I had lived through it and just forgotten it. Which would not have been entirely out of the question.

As a lifelong resident of Louisiana, there have been 49 Mardi Gras celebrations in my life. I don't remember them all. And I only remember some of some.

I don't remember the first ones when I was a little kid.

I do remember the one when I was 7 or 8 and cried because I caught only one lousy bead.

I do remember the ones when my mom and some friends took me to New Orleans to experience a "real" Mardi Gras parade. We found ourselves next to a very large group of very large Hell's Angels. And they were the nicest guys on Earth. Nobody messed with us, that's for sure.

I remember the first one I went to as a teenager -- without my parents. I got drunk on Boone's Farm Tickled Pink and nearly fell in the bayou trying to pee behind a closed downtown business. (Bathrooms can be hard to find during Mardi Gras.)

And I remember the one where some drunk guy handed me a bottle of champagne off of one of the floats. A police officer quickly took it away.

And I remember a few of the ones when I was a college student in New Orleans. But not all of them. And only some of others.

I remember getting mono after one Carnival season in which a sorority sister and I decided we were going to go to every parade that rolled Uptown. And we did.

But I think I would have remembered one that fell on my actual birthday.  That's kind of a big deal around here, and especially for someone who loves birthdays like I do.

So I was glad to know that this was the first. And probably only in my lifetime.

And I was like a kid at Christmas. The entire city of New Orleans was having a party. And I couldn't wait to get to it, to hold up the sign I had made proclaiming it my "Birth-Di-Gras." To see if it would work. Here I was, a 49-year-old woman and I had never done that before.

And I really wanted to.

But the day started out dull and dreary. Rain threatened. Bad storms were on the horizon for later. And my husband's baseball team is struggling, so he called a mandatory practice for 10 a.m.

So I was not a happy camper. There went my breakfast in bed.

And for a while, I thought, there went my Mardi Gras, too.

The parades began at 11 a.m. and The Coach didn't get home until almost noon. There was an on-and-off drizzle. And traffic.

But we made our way to Metairie, a suburb of the city. And lucked into the one parking spot left open in a little strip mall, then fought our way to the front of the crowd with our little wagon and step ladder. Then across the street. Then behind a little family - - that was ready to pack it in for the day.

So me and my sign moved up to the front while Lora Leigh worked the street.

And we had a ball.

Drunk guys, moms, grandmas and even little kids spotted me and my sign and threw me extra beads and trinkets. Some even mouthed the words, "Happy Birthday," as they rolled by.

Some looked at "Birth-Di-Gras" and didn't get it, so I flipped to the other side, which read, "Birth-Day-Gras" to give them a little hint.

One well-oiled gentleman (who must have been a wanna-be quarterback) tried to kill me with several bags of hot pink bags. Thank God The Coach was there to save my life.

Then there was the shower of goodies I received from my stepson, his wife and several other family members on Float 62 - including a stuffed animal I donated when I cleaned my daughter's room a few months ago.


In less than an hour's work of work, we filled our little red wagon to overflowing. And we were ready to go home.


But there was no rest for the weary.

Soon our house was filled with family and friends who came to help me celebrate with my homemade blue birthday cake. And there were the 100-plus Facebook messages I had to answer, many wishing me a Happy Birth-Di-Gras.

And so did I. And I won't ever forget it. 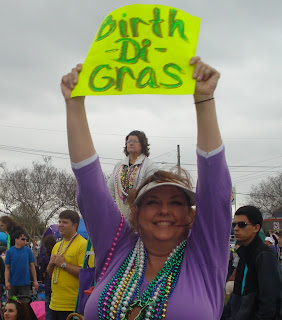