My friend Daniell is counting days.

In just a few short weeks, she and her family and wealth of friends will mark the one year anniversary of the death of her husband, Brandon. He was one of two St. John the Baptist Parish Sheriff's deputies killed in the line of duty last August, murdered by madmen with machine guns for no apparent reason.

Although she needed no reminder of the date, the last time I saw my friend I tried -- gently -- to get her to prepare herself for the inevitable onslaught-to-come of anniversary stories on the news and in the newspapers. And, because I know how we work, the slew of media interview requests sure to come as the date approaches.

"I can't believe it's been a year already," she said.

But a year has indeed gone by. A year of birthdays, holidays, and just plain old Mondays. And they have flown by, seemingly in an instant. But not the grief. The grief goes slowly.


I have been amazed by her grace every day of the last year, including that one. I imagine myself in that situation. On the floor. Screaming. Never wanting to get up. I feel that way sometimes now and all I lost was my job.

But she got up that day and every day since. She goes to work. She smiles at strangers. She holds their hands and makes their nails look pretty. She rubs my feet (when I let her). She runs (a lot). And she helps the world remember her husband.

But the grief never leaves.

It was 12 years ago today that I got that dreaded phone call in the middle of the night, telling me that my big brother had driven off a lonely highway and into a bayou down in the toes of Louisiana's boot. He had been on his way to the annual Grand Isle Tarpon Rodeo for a weekend of fun and fishing. Then he took his eyes off the road for just a second. And he wasn't wearing his seat belt.


I have spent the last 12 years trying to remind the world - or at least my blog followers and Facebook friends -- that I did, indeed, once have a big brother named Rhett, who picked on me and teased me and made me believe in the Boogie Man. That there once was a man who loved rock and roll and played mean drums on his dashboard. And fishing. And his wife and kids. I never want him to be forgotten.

Some may get tired of the annual ode to my brother and my memories of him. If so, feel free to move along. It's how I remember him. And it's how I grieve. And I still do.


He was my brother. The man who walked me down the aisle at my wedding, who stood there and said (enthusiastically) "I Do," when asked "Who gives this woman?" Who got sick later that night (heh heh). Who held my head the first time I threw up after drinking too much. Who drank vinegar and pickle juice. Who laughed when I fell in the bayou and told me the alligators were going to eat me. Who made my uncle let him jump ship the night we said farewell to our father, so he could be by my side.  Who showed me the shooting star across the sky. Who dropped everything to come to the hospital to wait with me as another woman gave birth to my child.


And he was gone much, much too soon.

So we have a date on the calendar, circled. Marked forever. And this weekend is the annual Tarpon Rodeo in Grand Isle, forever reminding us of where he was going, what he should have been doing.

But we need no reminders. It's only been 12 years. Already. 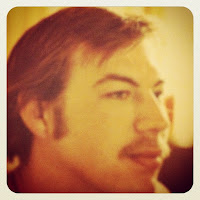