When I was about 6 years old, my mother entered me in Houma's Little Miss Merry Christmas pageant. Actually, I was in it twice.

I don't remember much of the first one. I remember the gorgeous dress my mom got me. It was midnight blue velvet with rabbit fur trim on the bottom and had a matching bonnet and a white rabbit fur muff (which I think I still have in my old keepsake trunk).

The next year, I wore the same dress. Without the bonnet and without the muff. I wore white elbow length gloves instead. I remember a little more about that one. At one point we walked around in a big circle so the judges could see our "poise."  I made the finals. Then we had to stand on the stage, under the hot lights for the longest time, smiling. Just smiling.

Future reporter that I was, I watched the judges very carefully. I watched one man judge and one woman judge actually argue over me. The man wanted me to win. The lady wanted another girl to win. They argued over it for a long time -- it actually got a little heated, in fact. I know I was really starting to get tired. My mouth ached from holding my pageant smile forever.

I was the first runner up. 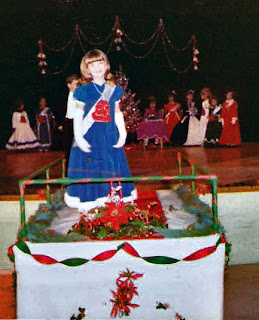 Later, when I told my parents and my grandmother about what happened, they kind of smiled at me and nodded indulgently.  They didn't believe me. And it broke my little heart

Well, how would they know? They were in the audience. BEHIND the judges. I was in front of them for what seemed like an eternity. And I swear that really happened. I became extremely frustrated that no one believed me. That might have hurt more than the fact that I didn't quite meet someone's standards of beauty and poise.

As my prize that night, I got a nice shiny loving cup and a dozen plastic roses (Yep. Still have both). I also got a lovely little Christmas charm bracelet that I absolutely adored.

Some time later (months? a year or so?) I very proudly decided to wear it to school. But at some point during recess, the clasp came loose and it fell off my wrist. A little while later, I noticed it on the wrist of an older girl. A Mean Girl.

I asked her to give it back. She said it was hers.

Near tears, I went to the teacher on duty, told her what was going on. She went to the girl and asked about the bracelet. The Mean Girl told the teacher that it was hers, that a relative had given it to her. I told her it was mine, that I had won it in a pageant.

The teacher didn't believe me. The Mean Girl actually laughed at me. Like I could ever be in a pageant and almost win. She didn't even know that two judges had nearly come to blows over me.

And it broke my little heart.

I remember both of those incidents as if they had happened yesterday. I can almost still feel the pain  of watching that girl walk away with my bracelet, knowing that I had lost, knowing that an adult had chosen her truth over mine. Once again, I didn't measure up.

Still kind of does, in fact.

Now, I'm not going to say I've never lied in my life. Sure I have:

I turned in my book report!
I don't know what happened.
Of course I'm old enough to drink.
I was home all night.
The check is in the mail.
I'm a size 10.
Yes, this is my natural color.
I'm busy.
It was great.
Even, "I love you too."

And I was believed.

But more than once, when it really, really mattered, I wasn't.

Just as I was told it would happen.


So I've told these stories to my own daughter, who is still in that "let's see what I can get away with" stage of adolescence. The child has looked me in the eye and said she didn't have homework, she did clean her room and she didn't drink the last soft drink in the fridge. I tell her that one day she's going to be really sick at school and need me to come get her and I won't. I try to tell her that she needs to tell the truth now so I'll believe her later. Trust is hard to gain, easy to lose and even harder to get back.

But the fact is, someday she will tell someone the truth about something that really, really matters,  and they won't believe her.  Someone will choose another truth over hers and break her heart.

I just hope it won't be me.