Hell, people barely read my musings on these pages -- except for the Russian site scraper people (WTF y'all???!!), and some one or thing in Mountain View, California, who/which reads my posts and then leaves random spam comments like "I read this post completely concerning the comparison of hottest and earlier technologies. Please visit my site -- IwishIhadabigpenis."

So then, why would I invite someone else to write for me when I'm having so much darn fun?

Oh, I have been asked to write for other blogs. I've written about my experiences as an infertile woman who eventually adopted a beautiful baby girl who fulfilled all of my dreams. And I've written for a local moms blog about what it's like to live with that beautiful baby girl now that she is a snarky tween who refuses to come out of her room except for macaroni and cheese. And I get to do another one next month!

My husband has his own blog. He writes, I check his grammar.

And I have encouraged my snarky tween to write her own blog. She did for a while, but just doesn't seem to be as focused has her mom. I think she could give the world some fascinating insight on what it's like to be in middle school (hey, James Patterson did it, and so did Jeff Kinney). I also think she could give amazing insight into Dr. Who. After all, she spent the whole summer watching EVERY EPISODE EVER MADE on Netflix while her dad and I were in the pool.

Besides all that, my kid is an excellent -- no, I mean an EXCELLENT writer. She is better than me. Actually, she puts me to shame. Because my kid can write fiction. Really, really good fiction.

And I kind of did it to her again this week when she read me the one she wrote for school.

It's a little Dr. Who inspired story about the angels who turn to stone. If you're a Dr. Who fan, you get it. If you don't (like me), you can Google it (like I did).

Here is a snippet:

Stone is just stone, right? Yes, it is. But then you turn around. You blink. Then it's different and you don't have any time to witness just what the stone has become. All of your time has been rewound and you don't know where you are. You don't know when  you are. You have to relive your life over again.
That's what happened to me.
I was sent back. Who knows how far?
It was the angels that sent me here. You know, the stone angel statues that look like they're crying? Yeah, them. One grabbed my arm and now here I am.
That's what the angels do. They send you through time. They seem harmless, they're anything but harmless. You think statues can't hurt you? You're wrong. It's not like they have anything better to do. I mean, they're statues.
It all started Monday, September 14th, 2009. Reagen and I were at an old house. We'd never been to the house before -- it just caught Raegen's eye. Not mine. I would've stayed as far as I could from that house if I had the choice. She just happened to be persuasive.
There were statues in the garden. I saw them from the window. It seemed like one was looking straight at me, through the spaces in its stone fingers. This seemed like a foolish thought at the time, so I dismissed it just as soon as it'd been thought up. Statues can't look at me, I thought. But boy, was I wrong. They could do much more than that.

I'm pretty darned impressed. It's a pretty good story. Yes, later on she uses some of the catch phrases about not blinking, but I love the way she weaved it all into her own story.

A few weeks ago, she was assigned to write about "Where I'm From."

This is what she wrote:

(I Am From) AdoptionI am from a familiar place known as Apple Street, but at the same time from high rise houses somewhere else. I am from a woman who is no longer required to look after me and one who always will be. From a writer and a coach. I am from a worker and a runaway. From the place I visit and the one that I live. I am from two places, two families, two homes, two hearts.

(Please note that the "runaway" is in reference to her biological father, with whom we have no contact.)

And again, I was blown away.

I guess every mom has her moment when her kid does something amazing and knocks her socks off. Walking. Talking. Showering without being asked. Cleaning their room. Saying please and thank you.

And sometimes it's when you realize that they just get the things that they're supposed to, and that makes you think that, maybe, just maybe, you're doing your job right. 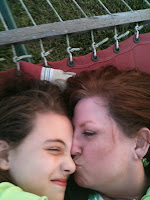