I don't often write about my husband.

Oh, if you're a regular follower of this little blog you know that he's a high school teacher/baseball coach and once was a short-lived volleyball coach, that he has a really bad memory, doesn't do birthdays very well, or DIY projects around the house. That he can remember virtually every pitch of that big win against E.D. White 14 years ago, but can't remember to put his cell phone in his pocket before he leaves the house. That he used to get thrown out of baseball games -- a lot.  That he loves baseball, his convertible, me, his children, his new grand baby, his sofa, his pool, his dogs (probably in that order) and that he always took my side when his mother and I would fight.

In large part because of that last phrase is why he and I have been married 20 years come December, and together two more than that. Yes, we did meet at a bar. We DO live in (the suburbs of) New Orleans, you know.

But I don't often get to write about The Coach. For one thing, I am a sports writer, he is a coach. In journalism circles,  it is extremely frowned upon for a journalist spouse to write about a public persona spouse, whether he/she is an athlete, a coach, a politician or a crime victim. It's just not done. So it made some folks nervous when he went from being the local assistant recreation director to my boyfriend, to my fiance, to my husband, to a coach (again) in the area I was assigned to cover for the then-daily newspaper.

In an effort to thwart that -- and my new stepson's senior season as quarterback at one of the schools in my area --  the Men In Ties moved me from my beat in the River Parishes Bureau to downtown New Orleans. Yeah. That was fun. Not.

Eventually, they saw the error of their ways and moved me back to where I belonged, with the mandate that I could not cover my husband's baseball team. That was fine by me. And we all got along splendidly until 2010 when I was moved from sports to crime (prep writer to perp writer), then 2012 when I was let go in the then-daily's move to "Digital First."

But now I'm a free lancer and the journalism landscape in New Orleans has changed dramatically. Now, the New Orleans paper I used to work for and the Baton Rouge-based paper I now write a lot for are in an all-out newspaper war over territory. I just happen to live in the suburbs between the two (a.k.a., "No Man's Land"). And, suddenly, some folks think it's OK for reporters to write about their husband's team. And sometimes, it just can't be helped.

Take last year, for instance. Mother Nature, who apparently dislikes the high school baseball playoff season immensely, decided to drop buckets of rain on the New Orleans area last spring. But my husband's team's playoff game had to be played. So it was moved -- from one day to the next, from one time to a later one, then to three different potential sites before it finally began at nearly 9 p.m. on a Thursday at a field no one ever heard of, and finished at nearly midnight. There was no way the Baton Rouge-ish paper would get a reporter there. They knew I was there as The Wife, so they asked me to write it up as The Reporter. And while, normally, I would never interview my husband after the game, the circumstances surrounding it were so unique that I was pretty much obligated to get a comment from The Coach about how his team handled all the adversity.

It was weird. We both hated it. And people took pictures. 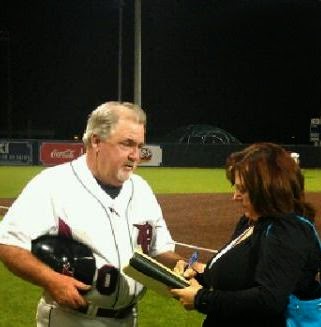 So, we both decided it's just best to separate. No, not like that. But we do try to keep The Coach's Wife separate from the The Reporter. That's how we like it. That's how the world likes it.

My darling husband, The Coach, decided he was going to give up being The Coach. He says he's ready, he's old, he's tired, he needs a new knee (that's true), he's ready to do other things. That all may be true, but I'm sure that does not include building me a gazebo in the backyard. He does want to take me to California and Chicago (why not Hawaii???) and spend some time with our fast-growing daughter and his new grand baby.

Whatever his reasons, the news created a stir in local sports circles. His announcement -- which initially came on his own little blog Coach Speak, became Front Page and 5, 6 and 10 o'clock news. (And the local newspaper is put in the unusual predicament of writing about one of it's former sports writers, married to the headliner. So many blurred lines...)

On Thursday, my husband's team traveled across the Mississippi River to face its biggest rival, the Hahnville Tigers. They're pretty good, now, and just came off a glorious weekend in which they went 4-0 against some of the top teams in the area. They started it with a HUGE win against the then No. 2 team in the state, Brother Martin, which was then-undefeated. Hahnville scored in extra innings to win. I know, because I was there. I covered it. I wrote about it Here and Here.

And while I was there, The Other Coach, whom I've known for a long time and like very much, told me he had a plan. He decided he was going to give my husband, The (Retiring) Coach, a rocking chair to send him off into the sunset.

Now, ever being the journalist, I knew this was news worthy. So, I set about letting my friends in the news media know about this event. It also was coming on the heels of a day organized by my stepson (with my assistance), in which we invited all of The Coach's former players over the past 25 years to come to the game and line up with him for the National Anthem as a surprise. Nearly 30 of them showed up. That also made the news. 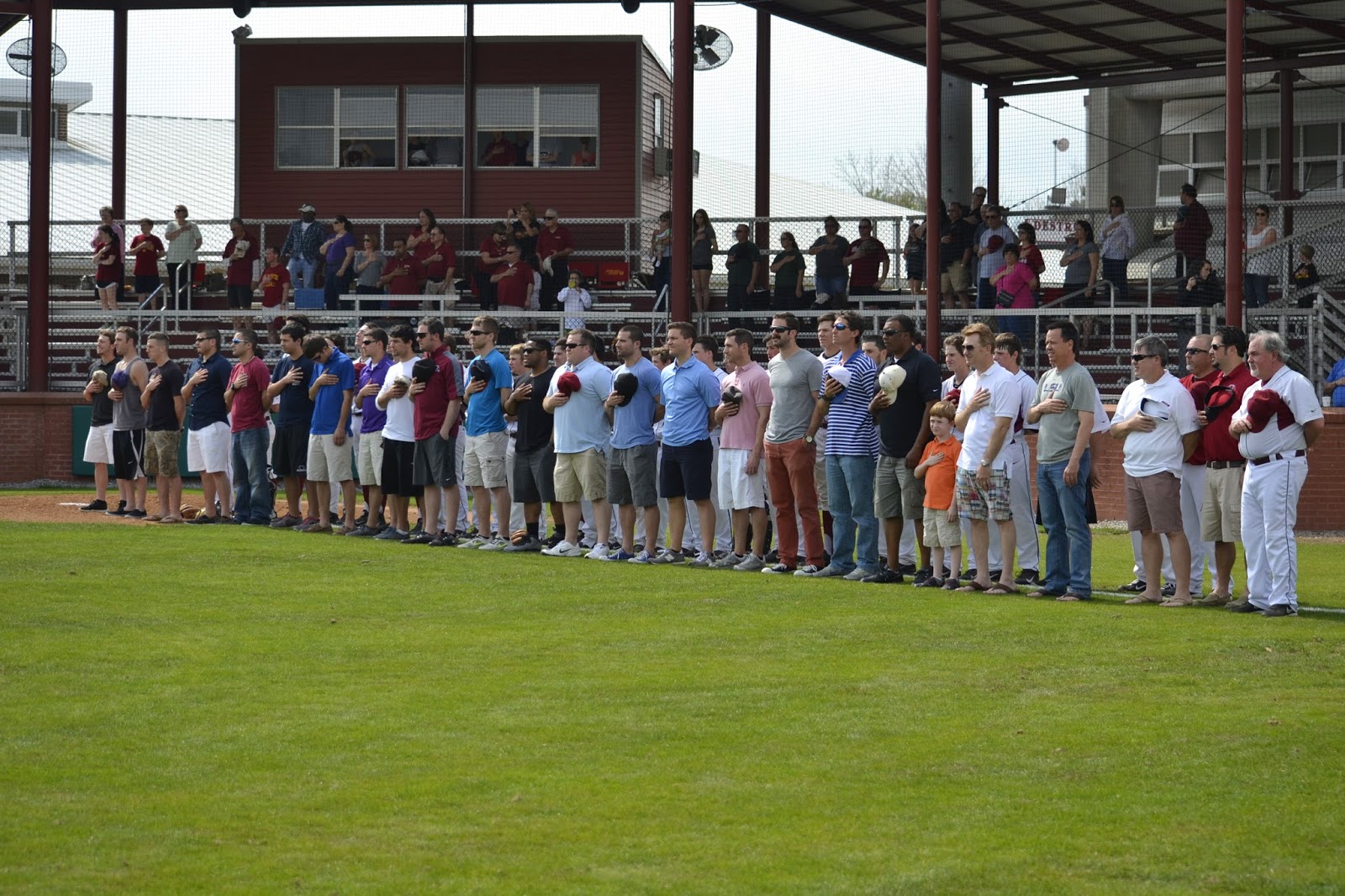 So after  I let friends and family and a few news media types know what was going down on Thursday, I set off to take care of me, cashing in the FREE King Cake body scrub I won from the local salon. Yay me!

Just as I was about to strip down to my skivvies, I get a text from The Other Coach:

Me: Want me to help?

Him: Yes. You can get to more places. Just bring me the receipt.

Me: I'm on it. Right after my massage

I then spent the next two hours smelling like a cinnamon bun, getting scrubbed and rubbed, and trying to think of a place in our neck in the woods that has a rocking chair for sale.

Then it hit me.

The local thrift shop! It's just a few doors down from my house, it's rarely if ever open, and it now contains a whole bunch of my belongings which we have put curbside for trash. The owner just picks it up and puts it in his shop to sell when he feels like it. I used to own a Bentwood rocker. I hoped I wasn't about to buy it back from him.

Nope. But I found this beat up old one, loaded it in my car and went back to relaxing.

Then, just before game time, I drove into the parking lot, texted The Other Coach, who sent two of his players to my car to get the rocking chair for his team to give to my husband as a gag.

And it went off without a hitch. With cameras and reporters from both newspapers there to document it, The Coach was surprised, humbled and honored. And I got a lovely bouquet of red roses -- from The Coach. No, The Other Coach.

I then spent the next two hours munching sunflower seeds and trying not to watch the action on the field in what turned out to be a very tight, nail-biter of a game. I try very hard to maintain my reporter face while watching these games. I don't want to be hollering and cheering against a team one day, then have to interview them the next. So I watch. I don't root. I don't cheer or clap or yell. I watch the crowd, the game, my husband, wonder when he's going to bunt and hope he doesn't try to steal home again.

He didn't. And his team won, 1-0, with the lone run scoring on a bases-loaded balk in the third inning.

After the game, I made a big production of running up to The Other Coach to hug him and thank him for my flowers. After I kissed The Coach, The Other Coach and I filled him in on the rather unusual events of the day. He laughed hysterically.

Then I put my husband's new rocking chair in my car and took it back home.

Later, we laughed about the whole thing. I made sure he wasn't mad, not that The Other Coach had given him a rocking chair, but also my part in in. He wasn't. He took it in the spirit in which it was intended and thought it was great fun.

"I thought it was great," he said. "But my team wanted to know why they got me such an ugly old chair."

Click Here to see a terrific video about The Coach and The Game.