I remember my 15th birthday.

My grandmother pulled out her best white tablecloth and the fancy milkglass pedestal punch bowl. My mom got me a fancy cake from Caro's in Houma that was decorated to look like a pair of blue jeans (but was really just a horseshoe). And my cousins Gloria and Laura and Aunt Rosita, my sister Jo Lee and her kids, and a couple of good friends came over to watch me blow out my candles.

And I think the very next day, my mom took me to the Driver's License Office.

Yes, back then the legal driving age was 15, and we didn't even have to go to Driver's Ed class to get it. It was an elective at the high school. Just like HomeEc.

On Tuesday of this week, the Coach and I were joined by my stepdaughter Courtney, my stepson Daniel and his wife Cori and their two kids, Robi and Laken, at the local Sicily's Italian Buffet in LaPlace, where we watched Lora Leigh blow out two candles -- a "1" and a "5" --  on a Mardi Gras colored cake from the local grocery store.

I guess by the age of 15, we're just too cool for themed parties with balloons and coordinating paper plates. By 15, it's just about family and friends.


On the Saturday before she turned 15, Lora had a couple of friends over to "celebrate." By celebrate I mean, they sat around my dining room table playing on their phones, took selfies, SnapChatted with each other, ordered an obscene amount of pizza, listened to some crazy-ass music on Spotify and, before the night was over, watched an "Office" marathon on Netflix

Welcome to my world.

I didn't know what to do with myself. I had no dishes to cook, no dips to make. No themed goody bags to put together. At least she agreed to use the left over tye dyed plates and napkins from last year.

Yes, I now have a full-fledged teenager. I think. It's hard to remember when she hardly ever comes out of her room. When she does, it's for pizza rolls, Dr. Pepper or chicken pot pies. Or to take a shower. Or another one. Or to ask if her friend Devin can come over. Or if she can dye her hair blue.

I swear, sometimes she comes stalking into the living room and I jump in surprise because I'm almost forgotten that she lives here. She doesn't think that's funny.

I don't either, really.

The Coach and I have now reversed our roles a bit. Where I used to be the one who got her up, got her dressed, got her on the bus and talked to her about endless things, now he's the one. She is a freshman and he is a teacher at her high school. Now, he gets her up, makes sure she's dressed appropriately and has her school ID. There's no more bus, though. They ride together.

Now, he knows her routine, her dramas, her friends, her frenemies.

There's not much to know, really. She's an outstanding Honor Roll student. She sings in the choir. She's in the art class. She's on the girls golf team (because her dad is coaching it). She has nice friends both male and female. She doesn't bully. Doesn't get bullied. In fact, she's the one who will tell the bully to knock it off. All her teachers rave about her.

And she has a straight spine that only occasionally bothers her, like when she stands for a long time or when she just wants to get out of doing something.

Maybe I should be waiting for a shoe to drop.

Well, there is Driver's Ed in the very near future. 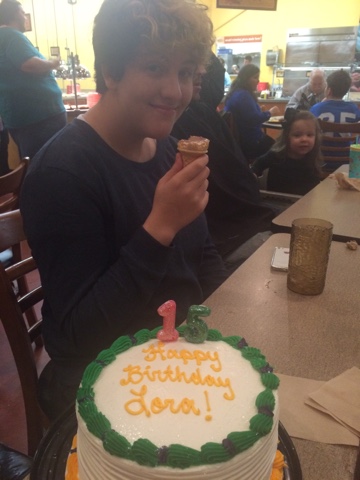