Down to the river

Just ask any bride. Any mom. Any coach.

But when they do, it really is magic.

When my Mama left this earth after 84 years of living her life to the fullest, my sister and I were left to face a challenge. Mom didn't want a funeral. No wake, no service and certainly no viewing.

We used to argue over this a lot. I'm one of those people who believe you have to have some kind of closure. My father's funeral and its aftermath is one of the enduring memories of my life. And it's actually a good memory.

"We have to have something, Ma," I'd say. "The way you'd have it, we wouldn't even get a day off of work! And you'd deny me flowers and pretty plants? Really?"

Occasionally she would concede.

"Have everybody over to your house, in your yard, then go throw me in the River," she'd say. A lot.

So that's what we did.

Six days after Mama went wherever she went peacefully and quietly in the middle of the night, The Coach and I hosted a party.

Y'all know I'm no stranger to parties, now. I host a parade every year. I've had a good dozen or so toddler, kid and teenage birthday parties. I turned my house into Hogwarts and a refrigerator box into a Tardis. Yes indeed.

But I'm not so adept at hosting a funeral.

OK. It was a memorial service. And I had a vision from the start. I wanted simple, elegant, but Mama. So I took down some of the Christmas decorations, made a little memorial table with pictures and mementos and ordered myself a big bouquet of flowers. 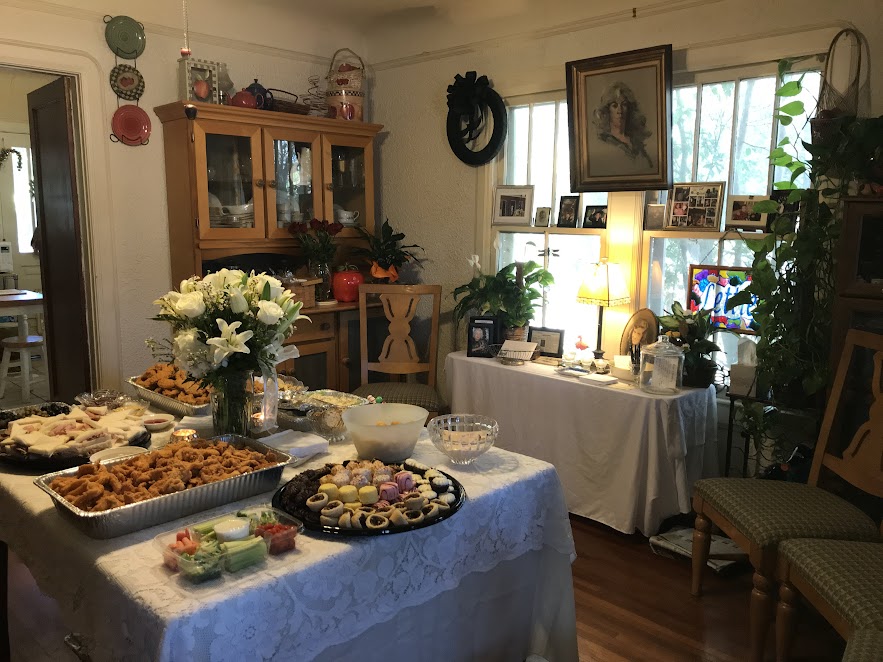 I didn't want a sign-in book, so I ordered memory cards for guests to write their favorite memory. And as a keepsake, I ordered Forget Me Not seeds and envelopes. (And spent hours filling them!)

Throughout the day a steady stream of family, friends and complete strangers made their way to and through our little cottage, grabbing a chicken tender or a piece of catfish along the way. A big gang gathered in my tiny kitchen to drink and talk about those who were and weren't there. (You know who you are.)

Meanwhile, the kids ran around the backyard, testing the strength of my hammock and miraculously avoiding the dog droppings.

Then about 4 p.m., my husband got everyone's attention and explained what would happen next. We were going to the Mississippi River, where there would be a nice (we hoped) sunset.

And we took Mama and her dog, LulaMae, with us.

A caravan of about 20 or so cars followed us to the Bonnet Carre Spillway, which is about a mile from our house. Most people know it as the big Army Corps of Engineers project that has to save the City of New Orleans from flooding every once in a while. We also know it as a huge, wonderful recreational area where local folks fish, camp and play in the mud. It also offers a spectacular view of the Mississippi River and some gorgeous sunsets.

This day was no exception.

First, we gathered in a circle, each offering a memory of my Mama. How funny she was. How strange she was. How unforgettable. How stubborn. How bigger than life. How she often told people that she wanted to go into the river.

And even though she wasn't very religious, we all held hands and said one for her anyway.

Just at that moment, a lone Bald Eagle decided to fly over us. I had never seen one in my life.

Then we made our way to the water's edge, small waves rippling toward the shore, and let her and LulaMae go, riding on the little waves and taking their sweet time about it.  A dozen red roses followed her -- the color of her ubiquitous lipstick -- and one beautiful flower garland handmade by one of her dear French Quarter friends.

And behind it all was a perfect sunset. Some even saw a cross in the clouds in the sky.

There were tears. But there also was laughter. 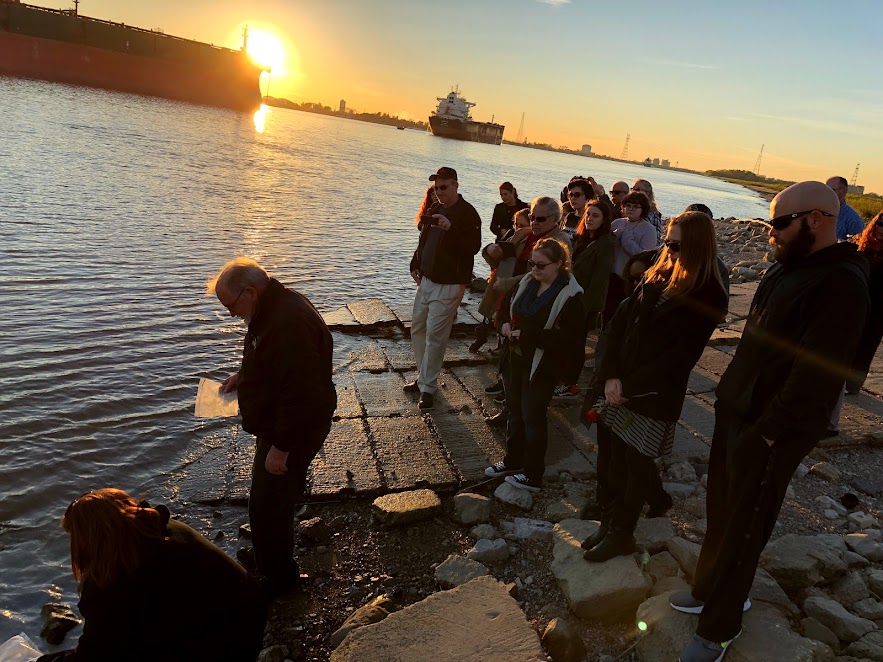