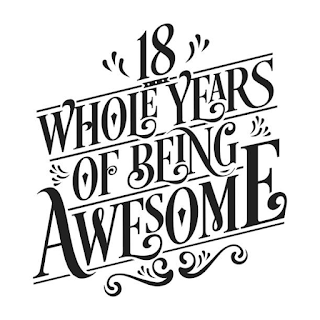 A few weeks before the end of 2018, I got a message from my daughter's doctor.

Figuring it was just a reminder that she had another birthday coming up, and thus another annual checkup, I didn't think much of it --- until I opened it and got a shock.

Legal. A legal adult. One who didn't need her mama looking at her medical records anymore, apparently.

Yes, my cute, sweet baby girl I prayed for and cried for and died a little for is all grown up. She is putting her finishing touches on her final year of high school.  She is writing essays and filling out college applications, mulling her options and figuring out how much scholarship money she can get and how much more green she will need.

She pretty much has decided where she wants to go (and it's not too far away!), but she's keeping options open. She wants to study music, but wants to go into the business part of it (even though you all know she has a beautiful singing voice she chooses to keep to herself).

She is a busy, active teen with many friends, an after school job taking care of a little boy for a local couple.

She has no residual effects from her scoliosis surgery -- except that she can't pick her socks up off the floor. She still has an aversion to putting her laundry away too, but at least she does it herself.

She is strong, independent, stubborn, wickedly funny and willing to fight for what she believes in. She already registered to vote, too.

How could I not be proud?

I have no doubts that she will go out into the world and find her way. I don't think I  have to worry about her making poor choices. She seems to have chosen her friends wisely and has never been much of a "follower."

But I'm a mom. And I'm doing my best to try to slow down time right now, to not think about that moment in a few months when she will back out of my driveway with a car full of stuff to move to a new place. Without me.

From the moment Gail put her into my arms I have been determined to savor every second I had with this child. I held her when I could (even when the mother-in-law said I was spoiling her). I didn't want to miss a thing. I let her sleep in my bed. I cuddled, rocked, coddled, held hands, hugged, kissed, sang, played, dressed up, read stories every second I could and brought her late to daycare just about every day (sorry Sue!). I Spent every extra minute I could with her..

And it still won't be enough.

Email ThisBlogThis!Share to TwitterShare to FacebookShare to Pinterest
Labels: 18, all grown up, college, don't blink, Eighteen, legal adult, lora leigh, my baby is growing up