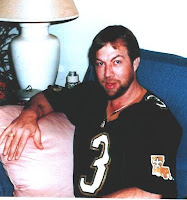 It was never my intention to memorialize my brother with a bug.

Oh, he definitely bugged me. I guess most big brothers do at some point or another.

He certainly liked to tease me, to take advantage of my youth and naivete.

He tried to convince me that root beer really did come from the roots of trees, that if a person ate an oyster and drank whiskey it would turn to a rock in his stomach, that if I swallowed the stuff the dentist uses to numb you BEFORE the shot, that you would die.

I nearly drowned in the dentist's chair when I was about 6 years old.

He did weird things. He drank vinegar straight out of the bottle. Tabasco sauce too. And pickle juice.

And when little bitty me fell in the bayou trying to match him in rock-throwing, he took his damned sweet time going to tell my mom. As I awaited rescue he warned me that the alligators and the water moccasins were coming for me. Then he laughed at me when they pulled me out of the mud.

That was my big brother.

On July 25, 2001, my big brother, Rhett Martin Lyons, left his home in Houma before the break of dawn for his job in Elmwood. After working a full day, he stopped for a beer with a couple of his buddies. Then he got in his car and headed for Grand Isle and the annual Tarpon Rodeo in the rain.

He did not buckle his seat belt.

But when the fall season came along, there was an empty seat in the stands where he would have been.

And in the spring.

But although he was gone from our presence, Rhett was never far from our hearts. And as Marty's first season began, we all kind of felt like he had an angel in the outfield. We certainly called on him a lot, looked skyward a lot, prayed a lot. We even sent him balloons on senior day.

Maybe it was so. The 2002 Wildcats went 24-7, with quite a few improbable wins, and made it to the state tournament in New Iberia for the first time -- ever.

And it was at that tournament that I asked for a sign.

Being a first time nervous coach's wife at the biggest game of my husband's life so far, I was looking for one. In between rocking and feeding my then-toddler daughter, my stomach was churning and my palms were sweating for my husband. I was looking for some reassurance that things were going to go well for him.

"Make lightning strike... NO!!! That will hurt somebody."

And no sooner had the thought formulated in my brain than a beautiful blue dragonfly landed on my leg.

I caught my husband's eye in the dugout.

"He's here," I said. And he knew exactly what I meant.


The Wildcats didn't win that game, but our family was left with a legacy... and a mascot.


I now have quite a collection of dragonflies in and around my house -- mostly jewelry and garden decor. And friends and family are always on the lookout for more. The whole family has begun to collect them, in fact.

They remind us all of him.

My daughter used to say, "Look! It's Uncle Rhett!" whenever she would spot one.

The following summer Marty's players were trying to shoo one out of his dugout when he realized what they were doing.

Then he held out his hand. The whole team stood agape as the bug landed safely on his palm.

Maybe it is so.

I'm sure some question my equating a bug with a brother.