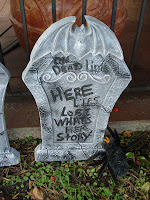 A hush fell over the marsh on Sunday, Jan. 9, 2011, as Donald put away his pirogue and fishing poles and went home to be with his parents, Donald Sr. and Cecilia.

I did not know Mr. Donald, but I hope he finds peace in his eternal rest. He sounds like a great guy.

I know this because those he left behind thought enough of him to put some thought and care into his obituary.

I know that formula because, like most journalists of my generation, I got my start in the newspaper business writing obituaries. And they ALL followed that same, staid old formula.

But as newspapers began to shrink, so did the obituary. Used to be, anybody could get a nice little write up in the local daily. Nowadays, you have to be almost famous.

But the story of your life can be bought as ad space -- sometimes at a hefty price. And once family members began to realize that they were buying all those inches in the back of the Metro section, they started to do it "their way."

I have noticed the trend.

William Wallace, who never passed up a chance to argue...

And Mr. Donald, who apparently was very loud in the swamp.

And it makes me wonder... What would I like MY death notice to say?

Shouldn't this be something we ALL contemplate, along with the disposition of our estate and who will get all of my shoes when I'm gone?

It's not being morbid. It's being realistic. We aren't getting out of this alive. And someday, our entire lives -- who we were, what we did, all that we accomplished and left behind -- will have to be summed up in just a few paragraphs...

Written by a stranger?

So here is what I'd like my death notice to say:

Lori Lee Ann "Lolo" Lyons Luquet, 102, a writer, left this earthly life and has moved to the beach, where she plans to float on a raft on crystal clear blue waters, entertain her family and friends and every dog she ever loved, and drink pina coladas for eternity.

And her friends and family.

Now to choose a picture....

Click here for the chance to win a slot in The Bloggess sidebarhttp://thebloggess.com/advertising-with-thebloggesscom/ for a month sponsored by freefringes.com