It was the middle of the afternoon when my daughter came to me, her visiting friend trailing behind.

That's an unusual request, I thought. Normally it's, "Can I have another Diet Dr. Pepper (because I drank all of the Sprites)."

She deserves a cup of hot tea after the week she's had. On Tuesday she tripped over her own two feet at school, landed smack on her face and gave herself one heck of a shiner. She spent the rest of the week watching her face turn colors and trying to hide it from her friends.

Then, earlier today, she came to me nearly hysterical after she lost a tooth -- and swallowed it.

But I forgot. Got busy doing something else. Picking up all the pool stuff as the sun began to set. Digging up the plant I kept forgetting to water. Planting the seeds I never took the time to plant. Trying to make my Sunday afternoon in my backyard paradise last as long as it could.

Trying to turn back time.

"Did you tell them you'd make them tea?" my husband asked, quite some time later.


So, I decided to make it up to her. Instead of two cups and two tea bags, I dusted off the little red teapot my stepdaughter bought for me one Christmas.

And I dusted off the creamer from my wedding china.

And the little red demitasse tea cups my mother let me keep after the big birthday party.

And my little demitasse spoons from my silver.

And I was just about to call her down from upstairs when she came on her own, and spotted the set-up on the little table in the kitchen.

And I poured a cup for her and one for her friend, showing them how to hold the top so it wouldn't come off. And I dug out some little cookies for them to nibble on. And they both had smiles on their faces as they sat there sipping tea, pinkies out.

"I haven't had a tea party like this in forever," Lora said. 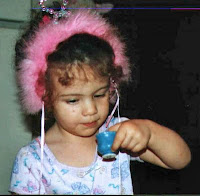 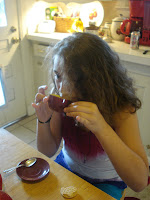