You have to watch 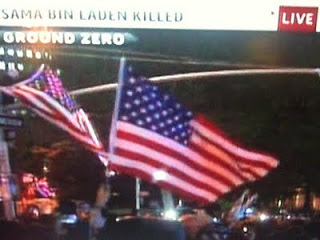 I have been glued to the TV for hours now -- news junkie that I am -- watching as America celebrates the news of the day. Military forces have killed Osama bin Laden in Pakistan.

She, however, has been watching the Disney Channel in the other room. And is itching to go back to it.

"Because it's history," I replied. "Someday you'll want to tell your children that you saw this."

So she looked. She watched. But she doesn't know.

She was just an infant the day those planes crossed the sky and changed the world forever in the year of her birth.  She has no images in her head of the towers aflame, of the black smoke, of the dust covered people, of the horror-stricken faces. She doesn't remember that punched-in-the-gut feeling we all had.

She has no idea who or what an Osama bin Laden is.

But it's my job to teach her.  So I made her come into the living room to watch the crowds as they gathered in celebration outside of the White House and at Ground Zero tonight, in the moments after the President announced that bin Laden had been killed. Just as my sister made me come out of my room to watch the moon landing.

"Who killed him?" she wanted to know.

She watched some more, but was really waiting for me to hand over the laptop and let her go.

"Yeah," she replied. "He was that dude that took some planes or something."

And I realized that she doesn't know.

I gently tried to explain.  But how do you explain it to a young, innocent child who has no concept of such evil? How do you tell her that a human man could fathom such a horrific plan to willingly kill as many people as possible using fuel-loaded jets? Do I want to give her the nightmares we've all had since then? No.

But I want her to understand what this day means to so many.

So I explained that he came up with this idea, to take over some planes and fly them into the buildings.  Then
I Googled 9/11 attacks. Images. And I showed her.

"Wow," she said, looking at image after image of the flaming buildings and the pluming black smoke. "Where are the planes?"

But I don't think she got it.

And that's both a good and a bad thing.

Email ThisBlogThis!Share to TwitterShare to FacebookShare to Pinterest
Labels: history, the news of the day, TV