First it was enough to just be pink.  And cute.

Then she wanted to be a princess.

Then she wanted to be a mermaid.  A pink one, of course.

Then it was a famous singer like Hannah Montana/Miley Cyrus.

Then it was a wizard.

But in just the last 360-some-odd days, my darling daughter has gone from wanting to be a student at Hogwarts School of Witchcraft and Wizardry, to wanting to be an artist. She went from wands to mechanical pencils and erasers, from spell books to a never-ending supply of sketchbooks.

It's tough to keep up.

And it's tough to come up with creative ideas for these annual birthday extravaganzas.

Oh, don't worry. We are never going to be on MTV. I promise. But I do love birthdays. My mother made sure of that. And I do want my daughter to love hers just as much. And I do love throwing parties and coming up with clever celebrations for a baby girl - who isn't quite a baby any more.  So I had to do something special as she is about to turn 11.

What to do for a wanna-be artist?

Why, Cupcakes and Canvases -- of course!  I rented the local hall (so I wouldn't have to clean my house -- before or after), bought a bunch of canvases and paint brushes, (I already had a bunch of craft paint), a block of paper towels, some kid-sized aprons and we baked a batch of cupcakes.

I think it turned out great...

It really turned out great. ... Of course, the best thing was, I didn't have to mop. 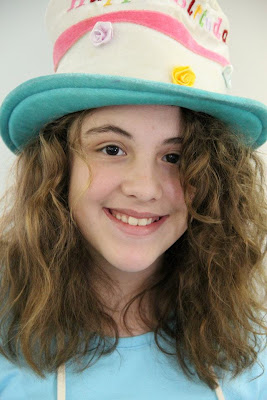