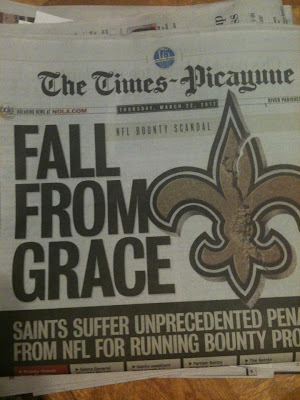 My black and gold feather boa wreath has been tucked away in a plastic bag in my closet since February, along with several pairs of over sized black and gold Mardi Gras beads, an assortment of Fleur de Lis and a black and gold rendition of the American flag.

I took them down -- reluctantly - after the Saints' humiliating loss to the 49ers in the second round of the playoffs. Like every other loyal Who Dat, I wasn't ready for the season to end just yet. And certainly, not like this -- losing in the final seconds of the game on a play every Who Dat in America could see coming.

I was embarrassed.  We expected more than this. We were better than this.

At the time, I posted to my Facebook friends -- a group that includes a large amount of fellow fans as well as several sports writers and other assorted newspaper folk -- that I felt like a spouse in a really good, strong marriage. I still loved my Saints, I said,  but I was really, really mad at them.

Then came the rumors about "Bountygate." The Saints were being investigated for having a bounty system in which players were paid bonuses for not just hitting opposing players, which they are paid to do and expected to do and do well, but for trying to actually hurt them, cause injuries, have them carted off the field on a stretcher. And the coaches not only knew about this,  but instigated it.


Then, I posted, I felt like the Saints had cheated on me.

Well now I feel like they got her pregnant. With twins.

Yesterday the NFL brought the hammer down on our beloved Saints, the team that lifted a region and indeed a whole nation from the mud and the muck left in Katrina's wake. Coach Sean Payton, suspended for a year. General manager Mickey Loomis, suspended for eight games. The team fined $500,000. Our former defensive coordinator, who allegedly organized the whole thing (I'm a crime writer now), banned indefinitely (and that's a good thing).


Some of my fellow Who Dats are angry, insisting that Commissioner Roger Goodell is picking on "us," making an example of "us," trying to insure that we will NOT  be the first home team to ever host a Super Bowl (Super Bowl XLVII is in New Orleans next February). Really?

Some are insisting that every team is doing it (so it must be OK) and we are being singled out. Or that we did nothing wrong.

Only a handful -- like me -- believe we got what we deserved.

As a sports writer for 23 of my 25 years in this business -- and as a fan for all of my life -- I know that football is a violent sport. Hitting is part of the game. Injuries are part of the game. And hard hits are rewarded, with pats on the butt, slaps on the helmet, stickers, Player of the Week honors, spots on the All-Metro team and championship trophies. But when a player intentionally sets out to injure and or maim another -- even for what we consider to be pocket change -- well, that's crossing the line. And that's what we did.

I am a long-suffering fan. I endured the humiliating losses, the humiliating seasons, the jokes, the 'Aints. I once wrote "Don't laugh," when I was asked to select my favorite team on my Sports Illustrated subscription card.

And the night "we" won the Super Bowl, I took my daughter and danced in the street, celebrating with unprecedented joy the end of our suffering.

But now our halo is crooked and our one shining season is tarnished. People are talking about asterisks next to our name.  We are, once again, a laughingstock. Worse, we are said to be "dirty."

But I still believe.


But I am embarrassed. I expect more than this. We are better than that. 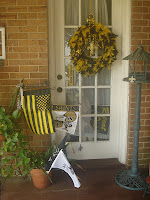