In the line of duty

It was one of the hardest days of my life.

Being a journalist for a newspaper that no longer wants me.

Being a friend to a friend.

Holding her hand and absorbing her sobs. Her holding mine with its perfect manicure, thanks to her.

A reporter helping to report on the murder of two local policemen -- one of whom just happened to be the husband of one of my dearest friends, shot in the line of duty by a mad man. And for no apparent reason. A reporter who screamed when told by her editor to "write down this name."

He was one of the good guys, who grew up to be what he always wanted to be. Who took his job seriously. Who genuinely loved what he did. A big, burly cop who scared the crap out of you when you first saw him, but proved to be nothing but a big teddy bear who loved his wife, his children and his motorcycles.

Who laughed at the sports writer turned crime reporter who was a fish out of water when she had to cover a bus crash, and urged me to watch where I was going so I wasn't run over.

So I put his picture in the newspaper.

Who left behind a funny, smart, talented, beautiful young woman who is now a widow with four children and a step-daughter. And a big empty space next to her in her bed. And in her broken heart.

I did what I could. I waited for her at the hospital, then went to her when she refused to come.Told her what I knew, even what she probably didn't need to know.

Then I drove her to find her lost soul mate, honored to be given the privledge. And I pretended for the time being that I didn't have a job to do.

I promised to do whatever I could for her, whatever she needed, knowing I could do absolutely nothing to ease her pain or wake her from her nightmare. I even offered to see him first.

I held her hand. Hugged. Advised. Made a joke or two -- because that's what we do. Squealed that we had a police escort who blew us through the yellows.  Offered to drive through the Daquiri Shop on the way home if she wanted. Promised to reschedule my nail appointment for another day. Got our photographer to take the photo of the "magic bandaid" given to her by her 6-year-old daughter, to heal her mommy's hurting heart. Teased her about her own unpolished nails as my colleague took the picture.

And warned her about people like us -- just doing their jobs.

Then I went to work and helped tell the story no one wants to tell.

A few days later, we sat on her back patio with a bunch of her many girlfriends. The tears had dried for now, not that the pain had gone away.  She wanted me to help her write her husband's obituary for the newspaper. She wanted something different. Something unique. Something special. Like him.

It took us hours. It took a thousand laughs. And brought a few sweet smiles.

I told her, "Some cook. Some clean. I write obituaries." That I can do. 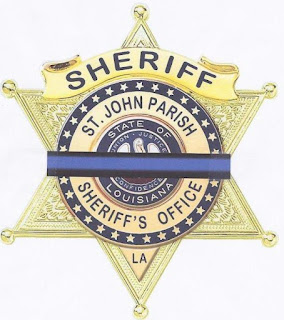 Email ThisBlogThis!Share to TwitterShare to FacebookShare to Pinterest
Labels: bliss, crime reporter, friends, girlfriends, in the line of duty