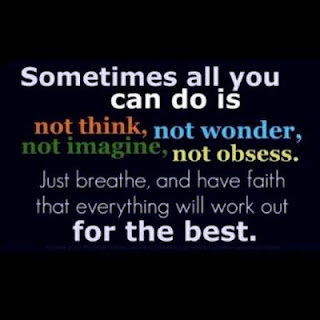 Since the heart-wrenching drive to the mothership. Since the pat on the hand, the handing of the white envelope, the look. The words, "You are being offered a severance."

Ending a 26-year career in the span of about three minutes.

And since then it's been 50 days of misery, worry, fear, disappointment, humiliation, anger,  regret and sorrow.

Of sleepless nights, mindless wanderings, and tears. And a little bit of alcohol.

Of feeling like I've been dumped by a heartless former lover.

Of what ifs and what wills and what nows. And a few WTFs.

And trying to hide it all from those around me.

Oh, I've done all the things I'm supposed to do. I Googled "How to Write a Resume" and "How to write a killer cover letter."  I've hit up Thesaurus.com to look up synonyms for "reported" and "covered" and "wrote."

I've Facebooked and tweeted and blogged.  I've joined LinkedIn and WorkNola.com and Simplyhired.

I've made wishes, consulted the Tarot and prayed.

And I've gone to work every day, at the company that has rejected me -- twice. And I've greeted our customers and taken their money and told them how to put an ad in the paper they don't even read and said that I understand how disappointed they are that they will no longer have a newspaper to read while they drink their coffee four days of the week.

I've scoured the want ads -- even in the paper that no longer wants me -- looking for something,  anything else I might want to do or might be good at.

And I've found a few openings that sounded somewhat interesting. One that truly piqued my interest.

Only to fear rejection too much to apply.

When in the hell did that happen?

Eventually I did send that resume off with a wing and prayer, only to hear absolutely nothing.

Is that the way it's done these days?

Then there was the job I applied for, putting my supervisor as a reference. Only to find out later that she applied too.

Oh it hasn't been all bad. There are days I am exhilarated at the upcoming months of freedom which will allow me to do some of the things I've been meaning to. But then I just spent more sleepless nights mulling over whether to paint my front door red or black.

And there was the one day I did not feel like crumpling into a heap on the floor -- the day I was asked and agreed to return to my first love, sports reporting. I will be on the sidelines this fall. I will be writing sports again for a local web site. And I can't wait for that.

And in just a few weeks I will receive my golden watch -- a gift from the company for my 25 years of continuous service (they don't count the first eight months when I was technically "temporary," but I do) from the soon-to-be ex publisher of the soon-to-be-former daily Times-Picayune.

But on the last Friday of September I will say good-bye to the life I've known, the career I've loved, the company I've been loyal to.

And I won't even get a cake.

And I've been told that everything will be OK. That I'll find something. That I'll land on my feet. That I'll be snatched up. That I'm still good at what I do. That I'm talented and special. That we'll be OK

And I've smiled and nodded and tried my best to believe it.

And sometimes, I do.