Having lived in south Louisiana my entire life, I'm pretty used to hurricanes. Yeah, I know the drill.

But over the years, the hurricanes have taught us lessons.

Hurricane Camille taught us the meaning of storm surge and recovery.

Hurricane Andrew taught me that Baton Rouge is not all that much safer than New Orleans just because it's a few miles north.

Hurricane Georges taught me not to go to my sister's house with my entire family and four dogs for a hurricane, and that stop-and-go traffic will make a standard poodle throw up.

Hurricane Ivan taught me that that it takes 12 hours instead of six to get from LaPlace to Houston, and 11 hours to get back. And that a Jeep Grand Cherokee is not the most comfortable car for four adults and a potty training toddler on said trip, especially when you're the one sitting over the drive shaft for most of that trip.

Hurricane Katrina taught us that some engineers cheated their way through engineering class and that a Category 5 storm is nothing to play with. And that even the best in-laws are better when they live somewhere other than your house because two women cannot play nice in one kitchen.

Then came Isaac. And there were more lessons to be learned.

I learned that my husband is a hunter-gatherer. While I made sure our house is safe and secure and orderly for the invasion of his mother and my mother and anyone else who might find themselves in need of a safe haven, my husband bought bread. Lots and lots of bread.

We have wheat bread and raisin bread and hot dog buns and three loaves of white bread. And, as if that weren't enough, he bought little pistolet buns -- but nothing to put on them. But he didn't buy hamburger buns, even though we planned to have Sloppy Joes for dinner.

And as of right now, any hungry person dropping in for a bite to eat can have his or her choice of leftover Sloppy Joes (but no hamburger buns), lasagna (but we ate all the garlic bread), hot dogs with chili, hot dogs without chili, fried chicken, steak, or, if that's not appetizing, The Coach can cook you up some ribs.

I also learned during this little adventure that my husband, The Coach, is the worst Pictionary partner in the world.

Sometime Tuesday night, we suffered our one and only extended power outage caused by Isaac. Left without television or Internet, our daughter emerged from her room, bleary eyed and annoyed. But we were ready. Anticipating just such an event, I had her gather a stack of board games for us to wile away the hours.

We started with Pictionary. The Boss, the 11-year-old, decided she and my mama were going to be partners because they were both artists. That left me and The Coach. (Grandma Jane had already gone to bed and had no idea that the power was out or that there was even a storm going on at all, for that matter. God bless her.)

The Artists got an easy one. "Unicorn." Nana, just a few days shy of her 80th birthday, got it right away.

Then it was our turn. I would draw. I picked: "One Armed Man." Easy, I thought. I drew a stick figure with one arm.

I drew the international symbol for "No" -- the circle with a line through it.

I even cheated a little and drew a No. 1. Nothing.

Finally, in desperation, I drew the only thing I could think of to make a man recognize one of his own kind. A penis. Yes. I drew a stick figure penis.

"MOOOOOOMMMM!" my 11-year old screamed. She got it. The Coach? Not so much.

When our outage ended -- oh, about 30 minutes later -- I decided to shame my husband my posting the photo on Facebook. 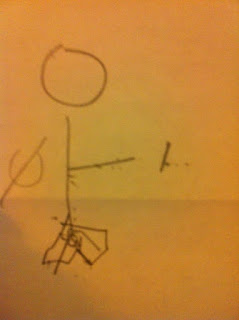 Kevin: "It means: I have no right arm and I throw a stick in your general direction!!"
Gwen: "It's a man driving a car. Jeez, Lori."
Dennis: "Whatever it is, it appears quite happy to see you."
Kevin: "Ah, ARMLESS and happy to see you!! Yeah, that'd work."
James: "I would've guessed "pants on the ground"
James: "No pants on the ground? Or, "a one armed man should not attempt to wear baggy ass pants because ummm" IDK."


OK. So maybe the coach isn't so bad. He didn't get "bike pants" either.

Later we moved on to a goofy game called Headbanz, during which we shamed the dog. 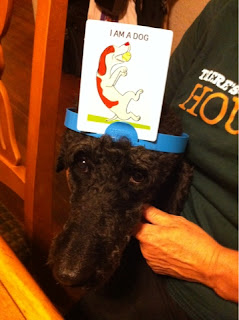 He didn't get it either.


In all seriousness, while I and my family remained safe and sound in our 80-year old house in St. Charles Parish, many, many of my friends just a few miles to our west in St. John the Baptist Parish have been devastated by flood waters caused by Isaac. This is where I work -- or will for the rest of this month. This is where I used to live. In fact, the two apartments I once rented are now under water. The fine folks of LaPlace and Reserve, some in Garyville and Lutcher and Paulina and even as far as Gonzales are suffering in misery right now.

The recovery will take years. And I and my fellow reporters in the River Parishes Bureau of the newspaper, also located there, only have 19 days to tell their stories. It's heart-breaking.

I pray for them. I hope you will too.