My umbrella is back up.

The chairs are back around the table. The plants are back where they belong and the noodles are in the pool, which is now free of sticks and leaves and unripened pecans and back to its perfect shade of turquoise.


The oversized clock is back on the back wall of my house. It keeps perfect time, much to my dismay  as it ticks down the final minutes of my weekend pool time.

And my giant fish is back on the wall -- albeit in a new spot.

I think I have found most of the little stuff -- the solar lights, the rusted metal suns, the wind chimes and the sign that declares my back yard a "Dragonfly Crossing." I think that's all of it. The Coach has a tendency to pack things away in our garage and I never see them again. Or, not until the next hurricane anyway.

I did have to throw a few things away, things I loved and hated to get rid of so I held on to them too long. The "Just Another Day in Paradise" sign, for one.

The neighborhood is quiet once again. No more constant hum from the next door neighbor's generator as he awaited the arrival of the Entergy trucks to the street behind us where the pole went down. He apologized for the noise, as though we might be bothered by his attempts to stay cool and keep the entire contents of his refrigerator from spoiling.

And we no longer see the red and blue flashing lights from the police cruisers cruising up and down our street, keeping a watchful eye for trouble. And looters.

And, in my little corner of the world anyway, the lights are on.  My house is clean. My fridge is full. My air conditioning is cold. My legs are shaved. My teeth are brushed. All my storm debris is out on the curb awaiting the garbage men.

Both my mama and my mother-in-law have gone home.

Today is Saturday. It has been six days since I came home from work, settled in my mother-in-law and started to hunker down. Five days since we all woke up to calm but gray skies and began making jokes on Facebook.  "Anybody seen Isaac?" I wrote.

He arrived later that day (so did my mama). Slowly at first. Then surely. And like the unruly son-of-Katrina that he was, he kept us up all night, got kind of drunk and refused to leave.

Together, The Coach, The Daughter, Mama, Mother-in-Law and Leigheaux the neurotic poodle hunkered, and listened to every sound, every noise, every gust, waiting to see what it would bring. Listened as each one seemed to get stronger than the last. Listened to the constant sound of rain and weather men and women on cable TV.

We did lose our electricity for a while Tuesday night -- right after the second round of my virgin fantasy football draft. I got Drew Brees and Adrian Petersen, then had to let autodraft do the rest. In the meantime I learned that The Coach is the worst Pictionary partner in the world.

Sometime in the middle of the night I offered a tip of the hat to the men who built my little brick  cottage more than 80 years ago. They did it right, I must say. Even in 80 mile-per-hour winds, my little house didn't move, didn't sway, didn't shudder. Even upstairs, where my daughter and I collapsed, exhausted, sometime around 4 a.m. on Wednesday.

Except it wasn't New Orleans this time. This time it was the suburbs, in places the guys from the Weather Channel don't do live shots.  Braithewaite. Lafitte. Slidell. Robert.

And the town of LaPlace, where have gone to work every day for the last 25 years. Where my many many friends are. More than 90 percent of St. John the Baptist Parish in Louisiana was flooded. The Interstate highway was flooded. The water system was shut down. More than 3,000 people had to be rescued from their homes. Kids I covered in high school. Teachers I know. Family members of friends. The local high school. The woman who grooms my poodle.

And, just like Katrina, I'm feeling the survivor's guilt. I suffered nothing but a full house with two 80-year old women, a crazy dog, a spoiled tween and an abundance of bread. I went without lights for for an hour. I lost nothing but my banana trees., two vacation days and a few hours of sleep.

And, unlike Katrina when my mother-in-law arrived on my doorstep after two days with everything she owned in one plastic grocery bag after the monster storm surge took her home in Waveland, Mississippi, this time I sent her home.

This is what it's like to ride out a hurricane. A Category 1 hurricane. A "minimal" storm that dumped 20 inches of rain in our area.That still leaves 40 percent of the area without power. That has closed schools for at least one week, some for two and maybe more. That reversed the flow of the Mississippi River.

That showed us all that Mother Nature is a bitch. Her son Hurricane Isaac was a bastard.

And sometimes normal is the most important thing we can have. 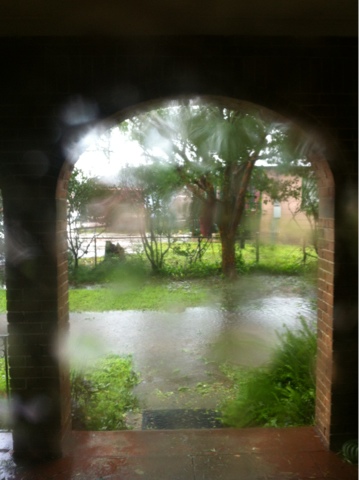