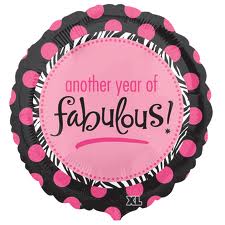 "If you want something done right, do it yourself."

As some of you may know, I turned the ripe old age of 50 last year. A lot of you people do know this because I wrote this cute little poem to myself, which has gotten, like, A TON of hits.  OK, most of them are from women who were really trying to Google "50 Shades of Grey" and found me instead.  I wonder how disappointed they were.

As some of you also may know, I did not have a big 50th birthday celebration last year. I went to lunch with my dear friend Danielle. I bought myself an hour-long massage. And, after a good nap, I took myself to dinner with family and friends at my favorite Mexican restaurant in my hometown. Of course, I had to drive my 11-year-old home and it was a school night, so I couldn't even drink... More than one.

It's not that I didn't want to have a big, fancy, blowout party to celebrate this milestone birthday you only see once in your lifetime.  It's that I trusted my husband, The Baseball Coach, to put it together.

"Stupid is as stupid does."

He didn't. He had a baseball game. He claims he tried. That he and the gang were working on a nice little surprise party for me, but that the Louisiana Department of Transportation and Development decided to close the big bridge which connects our community that weekend. So he canceled. And there was no other weekend in February or March that they could have had it. Or April. Or even May. Go figure.

So I was left disappointed. Again.

I told this story to a complete stranger the other day. First she tried to take up for my hapless hubby. "Well, he at least gave you a really good gift right? Like some jewelry or something?"

After I laughed hysterically I gave her some shade and said, "No."

She gave me some right back and said. "And you're still married to him?"


Yes. Yes indeed I am. You see, this isn't the first time he's let me down. There was the whole 40th birthday fiasco, in which he remembered it was my birthday but not which one. And he just doesn't get the whole birthday thing like I do. Never has. I do love my birthday. I love looking forward to it, I love celebrating it, I love the 256 "Happy Birthday" messages I will get on my Facebook wall. AND I love birthday cake!

I know. I should be used to my husband's lack of skills by now. But it still stung. OK, a lot. And the pain got worse as so many of my friends from high school hit the milestone and shared their fabulous celebrations on Facebook. Leslie got a surprise party. Donelle got 50 roses. Margot got a spa vacation. Me? I got tacos.

It's going to be epic.

And The Coach won't even be here. He has a game to play that day.

Maybe I should have hired my own damn stripper.

Email ThisBlogThis!Share to TwitterShare to FacebookShare to Pinterest
Labels: 50, Aged to perfection, baseball widow, birthdays, celebrate, do it yourself, parties, The Coach