I remember being in the River Parishes Bureau of The Times-Picayune on Friday afternoon. The TV was on, showing the big red blob out in the Gulf of Mexico.  I glanced at it as I gathered my stat sheets, notebooks and pens to head out to the football game I was set to cover, but didn't pay very much attention. It wasn't coming here, they had said. It was headed to Florida.

So, I went off to my game at Hahnville High School. It was the annual two-night River Parishes Jamboree, the dress rehearsal for the regular season. It was my 14th season covering high school sports for the local newspaper. There had been a first-night series of games across the river at Destrehan the night before. Hahnville hosted the Friday night event.

I delighted in seeing all the old familiar faces, both in the stands and in the press box. The announcers, the statisticians, the coaches, my fellow journalists. One of them was a nerdy computer geek. He had his laptop open. But he wasn't taking stats. He was watching that blob and what he kept calling "the computer models."

"It's coming right for us," he said, more than a little anxiously.

At halftime of the first game of the double header, the announcer, just a few doors down from my booth made an announcement.

"The St. Charles Parish School Board is monitoring the situation in the Gulf and will make a decision soon regarding the cancellation of classes."

That got everyone's attention.

By the time I finished my stats, sent my story and got home, the computer models had changed even more.

I remember insisting I had to clean my house on Saturday while Marty started picking up stuff in our backyard.

I remember pulling out of our driveway late the next afternoon, after I had forced my husband to go buy plywood to board up our house. After we had picked up all the stuff in our yard. After I had packed my car to the roof with keepsakes and memories, my great-grandparents' silver, my wedding album, my daughter's baby books, photo albums and scrapbooks, my dog, my daughter and some clothes. I remember wondering if I'd see my house again.

I remember arriving in Natchitoches, Louisiana, very late that night, and lugging all our essentials up to the third floor apartment of my stepdaughter, who was a student then at Northwestern State University. We were grateful that they were a roommate short so  that Marty, Lora and I had a bedroom and bathroom to ourselves. There was a communal living room and kitchen. Because no pets were allowed, my dog Lollee was taken off to Courtney's boyfriend's frat house apartment.

I remember spending hours glued to the TV and Courtney's desktop computer, desperately searching for news.

I remember waking up on Monday morning. I remember the look on Marty's face. The storm had passed, but the levees were breaking. The city of New Orleans was flooding.

I remember thinking of my newspaper friends and colleagues who had to stay behind. Those who had ridden out the storm in the main building on Howard Avenue in New Orleans eventually did evacuate. My nephew was on one of those trucks.

I remember the too-few mentions of the Gulf Coast, of Bay St. Louis and Waveland, where Marty's parents lived just a short walk from the beach. I remember the pictures on the TV of the vast nothingness that remained there. It was all gone.

I remember hearing that Brett Favre's mother had to swim out of her kitchen window in Kiln, Mississipi, knowing that is where Jane and Pappy had evacuated to.

I remember the feeling of utter dread realizing that they could very well be dead.

I remember spending countless hours on the computer, not just searching for news of my home and community, but also of scouring Red Cross message boards for lists of the dead and the alive. Hoping. I remember deciding to post my own message on a few, giving Jane and Pappy's names and our phone number.

I remember the call in the middle of the night, letting us know they were, indeed, alive.

I remember trying to call Marty, who had decided this one night to go to a local bar with his daughter. I don't remember which friend of hers I called, but I remember telling him, "They're OK." and the joy and relief in his voice.

I remember walking down the aisle of the local supermarket in Natchitoches and instantly recognizing those from home. You could see it in their faces. That look of utter disbelief. I remember hearing one guy talking on his cell phone: "Go home? There ain't no more home to go home to, man."

I remember the call we got from a friend (who also happened to work for the gas company), telling us he had been to our house and it was still there.

I remember the drive home, seeing army vehicle after army vehicle and school bus after school bus, heading south to help evacuate the people who were still at the Superdome and the Convention Center, begging for help.

I remember being so happy to see our house -- even with the big hole in the fence and all the trees branches all over the place. We didn't have electricity, but we had seen the trucks in our neighborhood. After emptying our refrigerator of what little was left in it, we went to a friend's house in St. Rose for a few hours and, every once in a while, I'd call our house to see if the answering machine would answer. If it did, we had electricity and we could go home. A short time later, it did and we did.

I remember the steady stream of people who came to our house over the next few days, folks just trying to get closer to their own homes to assess their damage. There still were curfews and barriers put up at various borders. Our house became a hub where folks could eat, sleep, rest, shower. Cry.

I remember my husband driving off with his friend, Bill, armed with all kinds of supplies to try to get to Marty's parents in Mississippi. I remember a few hours later, them arriving home, followed by my in-laws.

I remember my mother-in-law walking in with a small plastic grocery bag in her hands. It was all she had left in the world.


I remember my then 4-year-old daughter being haunted by "The Big Red Storm," she had been watching on our TVs for so long. When she finally did begin pre-school a month late, she and her friends used the little playhouse in the classroom to play "evacuation."

I remember the first time I drove into New Orleans and saw for myself the destruction.

I remember the feeling of relief to have work to do. Our area, being one of the least hardest hit, was back up and running rather quickly. Our stores opened, albeit with limited supplies. Our schools reopened and, believe it or not, our football teams were soon back in action.

I remember no bread or milk or water at the grocery store.

I remember having to wait in line to get inside the Walmart, then hours-long waits to get back out.

I remember hearing the stories of my friends and colleagues who rode out the storm at the paper's main office in New Orleans, then had to evacuate in the back of the big delivery trucks. My nephew was on one of them. We didn't see each other for six weeks. I remember falling into his arms and sobbing when I finally did at a mandatory meeting at the paper. And not one person questioned it or wondered why.

I remember driving the highways in Mississippi and seeing none of the landmarks we knew so well. I remember the feeling of deja vu -- it was just like it was after Camille.

I remember being so grateful that our area was spared so much. I also remember the guilt.

I remember the haunted looks and the tears in my father-in-law's eyes, especially as he tried, desperately, to list every single item he owned for the insurance company. I remember my mother-in-law, never crying but often reminding us that she "once had pots like that."

Yes, it was a decade ago. But not so long that we don't remember every detail, not so long ago that it doesn't still sting to retell it. My in-laws have since passed away, leaving behind little but an overgrown lot in Bay St. Louis, Mississippi, that no one wants to buy, sell or build upon. We paid the taxes on it -- for a while. I believe there are two houses rebuilt on their street, one of them vacant.

Fortunately, my daughter, who is now 14, does not remember much about Katrina. She remembers going to Sissy's house, but she didn't remember her reference to "The Big Red Storm," She just remembers sleeping on an air mattress and the fun picnic we all had in the living room one night. 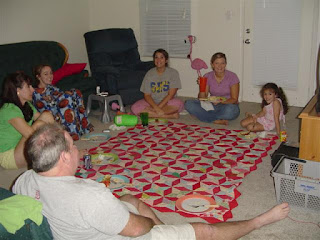 And even though we didn't lose our house and our possessions -- just a few trees -- Katrina still changed us. It changed the way we think about things -- material things. For a time, I had everything I thought was too special to lose stacked in one spot, ready to grab at a moment's notice. I've uploaded all of our photos to clouds and online storage bins so they don't get lost forever. My husband has not one single baby picture left.

And we didn't buy the "Hurricane Policy" our insurance company offered. We know it will do no good. It did my in-laws no good, anyway. Despite homeowners insurance and hurricane insurance, they got paid for their lost roof and their contents. That's it.

That doesn't help with our insecurity. Because we know that it all can be taken away in a flash. And no amount of money can replace what we remember.