As she lived out the last decade of her life in our little town of Norco, my Mama was known for a few things:
Her curly white hair
Her huge silver poodle
Her entirely black wardrobe
And her white PT Cruiser.

My mama loved them all, but she really loved her car, which she thought was just the cutest thing ever.

Every day, she would get in her PT Cruiser and drive to the French Quarter of New Orleans, where she worked as a Tarot card reader at The Bottom of the Cup Tea Room on Chartres Street. Every day she would park it at one of the many pay-to-park lots closest to the shop. They knew she was coming, too, and would save her a spot. As she got older and a little slower, they would even drive her around the corner to work then go park her car for her.

Those guys loved her and took pretty good care of her (although they never gave her a discount). After she got sick and missed work for a few months they even called to find out if she was OK.

Sometimes, after work, she would head over to Harrah's Casino. The car parkers there saw her coming too and gave her special treatment.

Anyone who knew Mama in Norco came to recognize her little car. My dogs even knew it and the distinctive horn.

Although there are others in our area, hers was the only one with a whole bunch of crap on the dashboard -- a big box of Kleenex, a huge magnifying rear view mirror and a desk organizer, where she kept her gum and pencils and a whole bunch of other stuff. My husband used to ask her how she could see to drive. She said, "I can't see anyway."

Nobody ever wanted to drive her car anyway. It had a distinctive odor, like, perfume, mint, old lady and dog.

When Mama got sick, the doctors told her she couldn't drive anymore -- a "death sentence" she could not comprehend and never did accept. She couldn't remember how to work her iPhone anymore, but she insisted she still could drive. Every doctor told her the same thing and she called each one of them stupid.

So when Mama moved in with us, her car came with her and was parked in the driveway. The Coach spent some time and money fixing it up and keeping it running because, she had agreed that, someday, after she was gone, the car would go to Lora.

But, as Lora worked on her permit hours, the car sat in the driveway. She never seemed in much of a hurry to get her permanent license. Not like me, who made Mama take me to the Driver's License Office on my 15th birthday.

Lora did start cleaning it out, though. And I can't even tell you the stuff we threw away -- empty gum packs, various tools, gadgets and organizers she never really used, and seat covers that were covered with white hair and food crumbs.

Sometimes Lora and her friends would go sit in it and listen to music. Occasionally she backed it up in the driveway. Lately the Coach had been letting her drive him to school in it.

Well, this week she became official. While I was off covering an event in the city, The Coach and The Kid went down to the DVM and got her a real license. She took off soon after, never looking back.

I just hope my Mama is riding shotgun, keeping her safe. 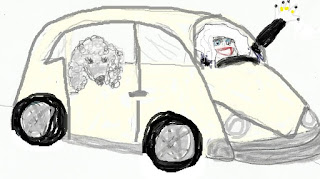