I spotted it in a newspaper ad -- back when there were such things and I read every single one of them.

A truckload sale was going to Baton Rouge. On it was a picture of this little blue playhouse. For $100. I wanted it. My daughter, Lora Leigh, needed it. No, she HAD to have it.

So I sent my sister and brother-in-law, who live in Baton Rouge, to get it. They did it because they love me and they even waited four hours to get it.

Then the Coach's BFF came over and put it together (because we don't allow the coach to use power tools). And it was just precious, with a tiny little porch, a dutch door and little windows. We found a second-hand play kitchen that fit perfectly, a table and chairs, and I outfitted some planter boxes with silk wisteria. We dubbed it 35 1/2 and tried not to let her see it until her birthday.

Of course that didn't work. One day we were in the upstairs bathroom and she happened to look out the window.

"Hey! Can I go see what's in that little blue house down there?

But on her birthday, after cake and all the other presents were opened, we led her outside and pulled off the tarp that was supposed to be hiding it. She was ecstatic. 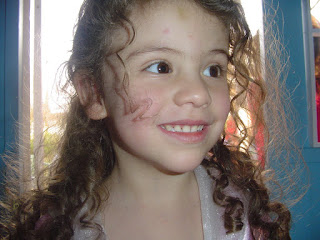 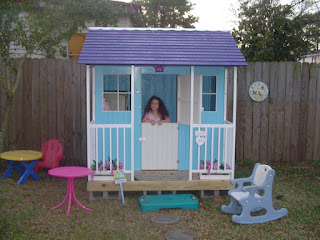 She went in right away with her little friend Carolyn and had a tea party. 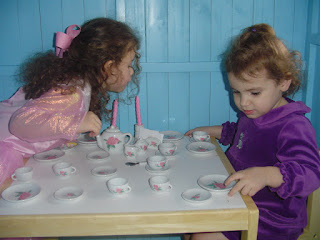 It was just as I hoped.

She got a lot of use out of that little blue house, playing in it, hiding in it with her friends. We hung Christmas lights on it and planted a garden around it. It was a favorite play area in our back yard, even after we built the pool. It even survived a couple of hurricanes and, like so many New Orleans area homes, got a temporary blue tarp roof after Hurricane Katrina.

But little girls grow up. It wasn't long before she was too tall to duck anymore. Wasps still liked it, though, and some mysterious critters or two.

Last summer we realized it was on its last legs. The floor was rotten. The roof leaked. All we used it for was pool noodles.

So yesterday I asked the crew that was cleaning out Mother Nature's winter wrath to knock it down. It took them only two good pushes. Now it's on the side of the road, waiting for the trash men to pick it up.

Lora wasn't there to see it go down, but I was. And it tugged at my heart a little. Her childhood is over. She's a 17-year old near-adult. Soon she'll be off to college, then to her own real little house somewhere that's not here in my backyard.

Last night when I told her it was gone she stopped for a moment, looked at me and said, "It needed to go."

Yeah. But I didn't want it to.

Email ThisBlogThis!Share to TwitterShare to FacebookShare to Pinterest
Labels: birthdays, childhood memories, little girl growing up, my back yard, my girl, playhouse, that little blue house