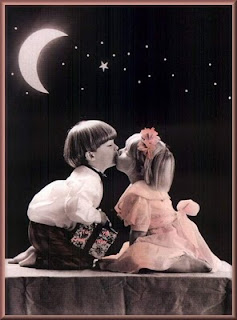 
A boy called my daughter today.

I didn't realize it at first, of course. At this age, he didn't sound like a boy. He sounded just like one of her other friends. One of her girl friends.

But then I heard her talking. And saw the roses rise to her cheeks. And heard her say his name.

She had mentioned him earlier this week. Said a boy told her she was pretty. The next day she told me he said he liked her.

"I made him," she said. And I don't even know what that means.

Then, as we were leaving aftercare one day, she told him good-bye. And I put 2 and 2 together.

And he doesn't like her, apparently. That's why he called her. Three times.

The first time I answered the unfamiliar name on caller I.D., I just assumed it was a girl.

"Lora's outside right now," I said. An extreme rarity, I did not add. "Can I take a message?"

The next time the unfamiliar name came up, I told Lora: "That's for you. Some little girl called you earlier."

Then, later this evening he called again.

"That's him?" Marty mouthed to me as we sat in the kitchen.

It was a much more muted reaction than mine earlier in the day.

I did a little happy dance. No. Really. Literally. I even high-fived her friend, P.J., who was in the living room at the time.

A boy called my daughter. Yay! At least now we won't go through life waiting for a boy to call, wondering why they never do.

Of course, quickly my brain went to her first date, her first boyfriend and prom. This just happens to be prom night in our area, and I thought of all the girls all over town primping and getting ready for this special night. I imagined my baby girl being one of those girls.

I texted my friend Daniell.

"A boy just called my baby."

I think the whole thing freaked Lora out a little too. Instead of being happy and excited, she was a little nervous. Worried.

Later, she gave me these little puppy dog eyes.

"OK," she said. Then the lawyer Lora came out.

"But I really think I'm too young to date," she said. Seriously.

"And I don't think boys should be calling me all the time."

My milk came out of my nose on that one.

Honey, I thought. Your dad is the local high school baseball coach. Your brother is a football coach. Your sister-in-law is a teacher at the school. And every teacher and coach at that school has watched you grow up. Believe me. They won't.