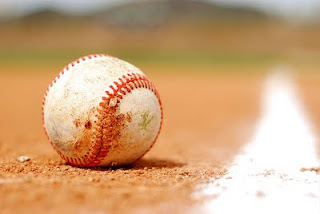 The nights filled with the interminable hours after one has gotten away, despite every valiant effort not to let that happen. When the number on their side of the scoreboard ends up being bigger than the number on our side. When he loses.

These are the nights he won't want to hug me or his daughters, won't want to take us to dinner. The wrong night to ask him about fixing the air conditioner in my car, or when he's going to move the bed in the guest room.

He might want to kick the dogs, but he won't.

And he might physically be sitting in the same room, but he'll really be a million miles away.  Or just back on the field he just left, replaying the game over and over and over again in his head, wondering what in the hell he could have done differently, and what did he do wrong.

It's my job, of course, to say, nothing.

No. "Nothing. You did the best you could."

And wish I could add, "You didn't miss the bunt sign. You didn't pop up to right field. You didn't overthrow the first baseman. It wasn't you who couldn't find the plate."

But I'm not supposed to say those things.

Because I'm just a coach's wife. The cheerleader. The hiney-patter.  And these are the nights coaches wives aren't supposed to talk about -- the nights we wished we had married a doctor or a lawyer or an accountant.  Anyone but a coach.

It's my job to pick him up -- along with the empty beer bottles on my dining room table -- dust him off and send him back out there tomorrow to do it all over again.

And be here when he comes home.