Oh brother, where art thou? 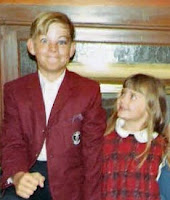 He was tall. And brave. And sometimes a little mean.

One time he stole all of my dolls and held them for ransom. I had to go make him a peanut butter and jelly sandwich before he would give them back.

He also was a little weird, as most big brothers are.

He and I would come home from school and go to my grandmother's house, which was next door to our little trailer. We would watch Dark Shadows and The Flintstones and Gilligan's Island,  and raid her always-full refrigerator.

I would sneak spoons of Grannie's can of condensed milk she hid way in the back. He would put lettuce in a bowl then pour pure white vinegar on top. Then he would eat the lettuce and drink the vinegar. I don't know why he didn't just drink it straight out of the bottle. Sometimes he did.

He also would drink little bottles of Tabasco hot sauce, straight up. And pickle juice out of the jar. And eat spinach straight out of the can, like Popeye.

Sometimes we would hide under Grannie's immense antique dining room table, using her lace table cloths to make a tent, or a fort. Each of us had our own secret hiding spot, a little cubbyhole atop the table's pillars, where we would stash our treasures and promise each other not to look.

Other times we would have belly flop contests off of the foot of the huge antique bed with its neck-high (on us) foot board. How we never knocked the chandelier out of the ceiling I'll never know. Or killed ourselves.

Or we would have great adventures in our back yard, which had a genuine Louisiana bayou -- with genuine Louisiana alligators and snakes -- running through it. He was old enough to motor off in the aluminum Joe boat and leave me behind on the bank. One day he took off with a bunch of his buddies. They returned hours later, paddling because they had broken the shear pin in the outboard, and singing "Row Row Row Your Boat" like a bunch of drunken sailors.

One day when I was about 5 and he was about 12, we stood on the bulkhead, which gave us about a seven or eight foot drop down to the water below, and decided to have a rock-throwing contest.

He, of course, threw his all the way across to the opposite bank about 30 yards away. Then I threw mine and fell right in.

Shocked certainly, scared perhaps, but certainly not willing to pass up an opportunity, my big brother looked down on his little sister who sat, covered in mud and terrified out of her mind and said, "Wait there. I'll go get help... Watch out for the alligators."

He then went to find our mom inside, passing right by our teenaged sister and her boyfriend, who were sitting in the yard.

Eventually he interrupted her: "Mom. It's impo-tant," my mom says he said.

Finally in exasperation she demanded, "What, Rhett?"

"Lori fell in the bayou."

I'm told that all hell broke loose after that, with my mother, my grandfather, my sister and her boyfriend all laughing hysterically at me as they tried to pull me out of  the mud and muck of Bayou Terrebonne.

And when they asked me what happened, I told them: "I threw a rock and forgot to let go."

Which, of course, no one has ever let me forget - even though I don't remember much of it. But it's a memory I have of my brother.

The one I lost one year ago today,  in another body of water, next to one of the  narrowest and most unforgiving roads in south Louisiana.  After a full day's work -- and perhaps a Bud or two -- he drove off into a rainy night, missed a curve and hit a culvert in the shallow waters . He wasn't wearing his seat belt, so he cracked his head open on the dash. And there was water in his lungs.

As much as I remember that day I threw myself in the bayou, I remember the day he threw himself into another and didn't come out.  The day I became a sister with nothing but memories of my brother.

How I wish I could write stories about him now, about being a grandfather,about seeing his youngest daughter graduate from high school,about cheering for the new Saints, the Hornets and LSU. About seeing him losing his hair. And looking like Grandpa. And letting him take his turn with mom at the hospital on the hill.

But all I can tell are the stories I remember, while I remember them, of the brother I used to have.