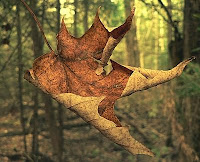 The first time she came to live with me she was heartbroken.

She showed up at my doorstep on a Saturday afternoon after a long week and a long ride, with everything she owned in this world stuffed in a plastic grocery bag.

Just days earlier, Hurricane Katrina had made its way pretty much right up Lafitte Street in Waveland, Mississippi. When it left, it washed out to sea the entire town, including my in-laws' house and virtually everything they owned.

All of her blue country furniture. The antique dining room set. The hutch that held her wedding china. And her mother's. The soft, plush carpet where my husband loved to take his post-turkey nap on Thanksgiving and Christmas. Nearly every photo of their family and children. The Christmas village she would set up under the tree. All the decorations she had hand-painted. The Irish Santa I told my nephew to buy her one Christmas.

We actually feared they had been lost as well. Knowing their area had been so hard hit, and knowing that they had only evacuated a few miles inland -- with just a few days' worth of clothing - we feared the worst. I spent days hunched over a computer in our own safe haven from the storm searching Red Cross message boards hoping to see their names listed as survivors, expecting to see them on the list of deceased.  Eventually I got a late-night phone call telling me they were, indeed, OK, just battered and bruised.

Days later my husband and his best bud went to "rescue" them, only to find them sitting beside a stagnating swimming pool, drinking beer without a care in the world.

That afternoon I opened my door, gave them hugs and, without a question, welcomed them home to our 1930s-built Tudor cottage.  I gave them our spare room. Made space in the one bathroom.  Got rid of my stuff, my books, some of my keepsakes, and put away others so they would have the space. I hung curtains, bought bed linens, apologized for the lack of closet space.

But she was still full of fire back then, living up to her longtime nickname, "Hurricane Jane."
And despite her broken heart and homeless state, she didn't remain a guest for long.

The curtains needed ironing. Soon my kitchen was rearranged to her liking. My butter was switched to their preference. We ate starch with every meal and seldom anything green. My TV was quickly replaced by a newer, bigger one (because they couldn't read the baseball scores on the bottom of the screen). My living room became theirs. But she wore sunglasses during the day because my house was too bright and she complained about my leaving too many lights on at night. (Her three boys were never afraid of the dark).

Soon there seemed to be no place for me to sit. To breathe.To escape.

For a year and a week she questioned my judgement, my cooking skills, my parenting skills, my work habits, my sleeping habits, my spending habits, and my weight on the scale. My house became ever-more crowded, our tempers ever more short. I went for a lot of long walks.

Eventually, my father-in-law decided enough was enough. He moved them out, first to an apartment, then to her brother's house in a nearby town. They needed a U-Haul to do it.

Then, one day, she woke up alone.

On the weekend after Thanksgiving, 2008, my mother-in-law called to say something was wrong with Pappy. My husband drove to pick him up and took him to the hospital, where they determined he was having a heart attack. He died six days later.

For the last few years, she has lived in a posh assisted living center nearly an hour's drive away. Safe, secure and unrestrained, she has been The Queen of The Windsor, ruling the roost and whiling away hours playing penny poker with her fellow hens. It's like the high school clique all over again. There's a fella or two there, but they don't seem to last very long.

But the phone calls from the staff have been coming more frequent, often in the middle of the night. The trips to the emergency room. The falls. The aches. The pains. The complaints.  And the simple things have become harder for her to do on her own. It was time, they said, for her to move on.

This time when she came to live with me, she is simply broken.

This time she arrived in a chair with wheels, a contraption to fit over the toilet, a shitload of pills and a dialysis schedule. A few of her belongings were carried by my husband, with the rest to come later. Most will go into storage.

We're moving her into a different room this time. Smaller. Closer so we can hear her when she calls for help and get to her quicker. We're building walls, closing in a porch, remodeling the bathroom to accommodate her.  But she still won't have enough closet space for her shoes and her winter coats (we live in Louisiana for God's sake!)

And there is no fire.

She is but a whisper of the mother-in-law I met nearly 20 years ago and promised that I truly loved her son. The woman with the perfectly manicured nails. The woman who cooked fabulous meals and baked wonderful cakes. Who painted wonderful wooden toll art for her house and mine. Who wore green and drank beer like the true Irish woman she is.

Who adored the baby girl we adopted and put into her arms every Friday night so we could go to football games, the first grandchild she really got to watch grow up.

Now she needs help to stand, to sit, to eat, to drink, to pee, to wipe herself. And sometimes she doesn't make it.

She now needs her own baby sitter.

On her last visit during Hurricane Isaac,  my husband was helping his mother shuffle across the floor, from one chair to the next.

"Here comes Hurricane Jane," he announced, trying to be funny.

To which my 11-year-old responded, "She's now a Tropical Depression."

She's been downgraded. Funny. And not.

My mother-in-law Jane will live out her final days, however many there may be, here. With her youngest son, whose own heart is breaking as we bears witness to this tragic transformation. I can see it in his eyes, hear it in his voice.

I've been told that I'm special for doing this, for "allowing" this. Inspirational even. That I am  earning my wings in heaven.

No. I'm not. I'm no saint. I'm not happy about this. I'm freaking out just a little. OK, a lot. My house is a disaster and will be for a long time to come. It's small. We have a lot of stuff. Too much stuff. There's not enough room for all of us.

But we'll make it. We'll do the best we can. Sometimes, there are no choices. You just do what you have to do.

Because, this is where she needs to be.