Her name was Elle 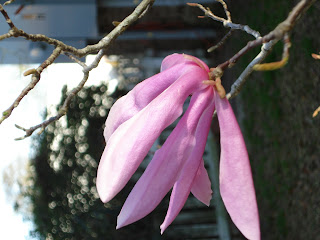 It’s not a special photograph. In fact, it’s rather poor quality. Dark and a little blurry.

It's just a cell phone photo of a blond-haired, blue-eyed little girl wearing purple girly pajamas and holding a pair of puppies.

Probably no one else zoomed in for a better look. And looked really hard at the face, at the hair, at the eyes, at the body, at the setting.  Or searched for signs. Of sorrow, of fear, of overall health and well-being. Of what might have been.

To the rest of the world, she's just another child. But for the better part of the year 2001, she was my child. The child I dreamed of. The child I prayed for. The child I yearned for.

The child I named Elle -- because everyone was expecting me to name my child something with an "L."

Just 19 days before the date I had circled on the calendar, her mother had a change of mind.  I won’t call it a change of heart.

Never in the six months I knew her did she say she wanted that child. More often, she said she didn’t. She had already lost custody of three babies, under circumstances never fully explained by her or understood by me. She never expressed much regret over that either.

“That’s exactly what I don’t want,” she said of the adorable straw-haired little boy bouncing from chair to chair in the room.

I looked at her in utter amazement.

“That’s exactly what I do want,” I said.

Just days after that, I got a call from my attorney, who was telling me that the boyfriend who had dumped her all those months ago and set her on the path to me, wanted her and the baby – and any money we were paying her for it. Just days after that, I was driving her to the attorney’s office for a face-to-face meeting with him so she could see if he was telling the truth. She said she had to look him in the eyes. In my heart I knew what was coming.

We left without them both.

And I never saw them again.

Until a few months ago when, on a whim, I typed her name into the Facebook search box. And there she was. Alone. No children. No him. Lots of high scores on Farkle.

I had never stopped wondering where they were. How they were. If they were taking care of the daughter they decided to keep.

So I guess I can forgive myself for checking on her again, on another whim. And I can forgive my heart for squeezing a little bit at the sight of the girl I named Elle and they named Sam. And another child, a boy.

And I can forgive my mind for trying to imagine what might have been.

If everything had gone as originally planned, after we got that other phone call from that other mother in the fall, today we would have two 11-year-old girls in our family, in our house, in our lives, and in our hearts. One light. One dark. Both tall. Elle and Lora Leigh.

But everything did not go as it was planned. It went as it was meant to be.