I oughta be in pictures! 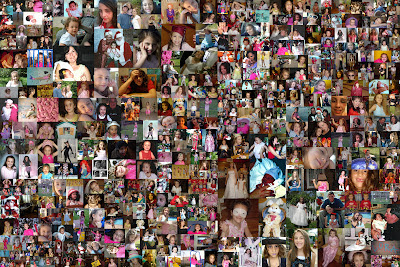 Near as I can tell, there are some 10,414 photographs of my daughter Lora on my computer.

There are a couple of hundred more pasted into her baby book, her two scrapbooks and the three photo albums I have put together. Another couple of dozen in our photo album of just our trips to Florida, a dozen or so on my walls, and another half a hundred in a little basket because I can't figure out where to put them.

In fact, I threw her a whopping 11th birthday party the Saturday before her actual birth date. Rented the local hall, invited her friends, baked her four batches of cupcakes and bought paint canvases, brushes and paper towels for everybody. It was fabulous.

And it will forever be remembered thanks to the 101 digital photos now stored on my computer.

Not one of which is of me.

Not one of which is of me.

On her actual birthday, we took my daughter to one of New Orleans' most famous hot spots -- the Rock N Bowl, which definitely lived up to its name. Again we whipped out the camera. Another couple of dozen photos were taken.

But this time, after hearing me bitch and moan about my lack of apparent presence at the previous event, my husband made sure I was in a few frames. There are six photos of me.

Oh it's not really their fault. Yes, my stepdaughter is a professionally trained photographer and did spend two years taking photos of tiny princes and princesses at DisneyWorld, but that's beside the point. I wouldn't aim the camera at me either. My daughter is a much prettier subject. So is my stepdaughter.

And my husband barely knows how to turn the camera on, much less how to point it and shoot. In fact, there would be a couple hundred more photos of our daughter if only he had remembered to put film in the camera on the day she was born. Seriously.

But it's not really a dad thing, is it? It's us moms who are intent upon documenting the moments of our lives, capturing them, trying to hold on to them. It's us moms who spend hours putting them into albums and scrapbooks. It's us moms who crop out the stranger in the background, remove the red eye then organize them into folders, upload them to Facebook and create Smilebox slideshows. The age of digital has just made it easier.

And it's usually us moms who spend a rainy afternoon looking through them and wiping away our tears. My daughter went from a teeny tiny pink bundle of joy to a taller-than-me, grumpy tween in the blink of an eye. I often look back on those cute little baby pictures and wonder where the time went.

And I cherish every one.

I live in the suburbs of a town filled with people who lost all of their cherished memories just a few years ago thanks to a bitch named Katrina. My mother-in-law used to chide me for taking so many photos. Now all of hers are feeding the fish at the bottom of the Gulf of Mexico -- except for the three from her wedding I just happened to scan into my computer. But there is not one existing photo of my husband as a baby.

There are now 414 photos of him on my computer.