There he goes -- again

I don't often repeat myself.

But I can't do this any better a second time.

I officially become a baseball widow tomorrow. Again. It's game day eve. Again. This is his 22nd season. His 11th at his current school. His 12th since we've been married.

I know the drill. 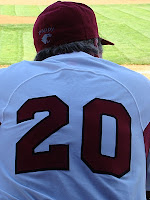 My husband went to bed hours ago.

It was only about 9:30 when he surprised me by suddenly announcing, "I'm going to bed," and asked me to do the few dishes in the kitchen, which are normally his responsibility.

But if I know him at all -- and I do -- he's upstairs right now, wide awake. He has tossed and turned a million times, studied every flaw in our bedroom ceiling, listened to every tick of the clock on the wall and seen every red number on the one beside the bed. His head is probably under the pillow and the blankets are all tangled.

And when I make my way up there in just a few minutes, I won't be waking him at all.

Tomorrow is Game Day, the first game of the 2011 high school baseball season in Louisiana. And, right now, he's so excited he can't stand it.

There are a lot of people in this world who love what they do. I used to be one of them. But my husband? He lives what he does.

He is about to embark on his 21st year as a high school baseball coach, his tenth at his current school, his 11th since we've been married. And he could not be happier.

The day he went from being a local recreation director to being a coach again after an eight year hiatus, one of the first things he said to me was, "I got my first name back."

And I became a coach's wife.

But I was there in spirit. And we certainly did rehash every detail when we got home.

And I learned to expect the unexpected.

Like the time he called me shortly after game time from his cell phone. I was at work at another game far away.

"Where are you?" I asked, wondering if the bus had broken down or the game had been rained out on that perfectly blue spring day.

"I'm in an oak tree," he replied, matter-of-factly.

"Why are you in an oak tree?" I asked, just as matter-of-factly.

"Because the umpire asked me to leave."

I learned to sleep through those nights like these -- the ones before the first game, before the next game, and after the last game.

I learned to live with the silent partner hunched in his chair, chewing his nails as he relives every pitch, every call, every errant throw while he pretends to watch TV with me.

I learned to live with the crazy nights when my house is invaded by coaches and other wives, often bearing food and drink, as they celebrate the good days by reliving every pitch, every call and every errant throw.

I learned to live with the absences, the late nights, the early mornings, the forgotten birthdays, and going solo to family gatherings.

I learned to live with the parents and fans who don't care that his wife and child are within earshot when they call him names because he tried something that didn't work or benched a kid who didn't.

I learned to live with the baseballs. Everywhere.

Because I'd rather live with a man who loves what he does than love a man who doesn't.

Just a few days ago he came home smiling ear-to-ear after watching one of his former players flirt with a no-hitter as the took the mound for the first time for one of the top college programs in this country. A few days later he grinned just as broadly to watch another former player on the same team hit a home run and yet another take the mound for the opposing team.

Tonight he spent hours hunting and pecking on the computer as he compiled a list of every one of his former players who is now playing ball somewhere, either at the college or professional level.

And in a few hours, long before the alarm sounds, he will get out of our bed and come downstairs to sit in this very spot, where he will slave over his lineup and play the game in his head a dozen times. Maybe more.

He will pack his bag with the tools of his trade, careful not to overlook any detail. (But he will probably forget his cell phone.)

Then he will return to our room to kiss me gently goodbye.