A Facebook friend recently shared the sad tale of a probably well-intentioned father who earned his probably mortified daughter a great big F on her solar system science fair project by doing too much of it himself.

When I was in elementary school I, wanting to be a broadcaster in the days before cable television, 900 channels and 24-hour news, decided to do my mandatory project on radio. Cool subject. But I needed a model.

My stepfather stepped right in. He suggested I build a crystal radio set -- a "very simple" collection of wires and other things that allegedly creates a working radio. Or it did in the 1970s.

You see how much I can tell you about it. He, being one of those parents, did the whole thing, cigarette dangling from the corner of his clenched teeth. I just wrote the report.

I remember it had a small piece of plywood and a coil of copper wires. I believe it was supposed to have actual crystals, but it did not. And when the judges asked me if it actually worked, I had to reply, "No."

Needless to say, I didn't win.

I was reminded of that incident recently when my own daughter was forced by her elementary school to enter the social studies fair. And I saw just how easy it is for a parent to get "caught up" in the project. It starts right away.

Offered a long list of potential subjects to research, I tried to steer my then 10-year-old fifth grader to a "good" one.

Naturally, the first I suggested was Adoption, she being adopted and all, and me having just published a little book on the subject.

OK. How about the Houma Indians, the unrecognized tribe our hometown is named for and of which she is, therefore, an unofficial member?

And no  amount of persuasion or suggesting would budge her one inch. She had no interest in any suggestion I might have. None. Nothing I said appealed to her. It never does. So I gave up.

And she, completely on her own, selected, "Home remedies."

Really? You sure? Ok.

Several weeks later, I was asked -- no, ordered -- to go buy her the three-sided board necessary to complete the project. Her dad, The Coach Teacher Guy, took care of that. He also bought her the necessary border thing and a little package of letters.

A few days later, I was told I must "help" prepare said board. We had to glue the borders on.

So we cleared off the dining room table and pulled out the glue sticks and threw away the ones that had hardened into rocks and, together, we glued on the swirly red borders -- her on one side and me on the other. And they were pretty straight. 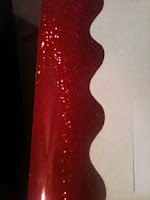 Then her dad came in. He being the math whiz (and me definitely not), he got to help her glue on the letters. First, however, she had to decide exactly what her title would be.

Then, using a very complicated mathematical formula, he and she figured out the proper spacing for that oh-so-catchy title. I left them to it. When they finished, they were left with: 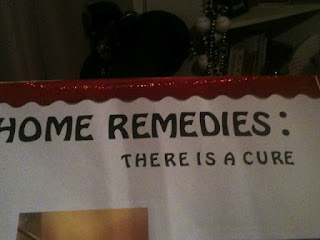 A little crooked but good enough.

Now if any of my daughter's teachers or any of the Social Studies Fair judges would like to know the extent of Lora's parents' participation in said project, that's it.

No really. That is all. She never asked us for another bit of help. A few days later I came home and she showed me the printed photos she had pasted to her boards. 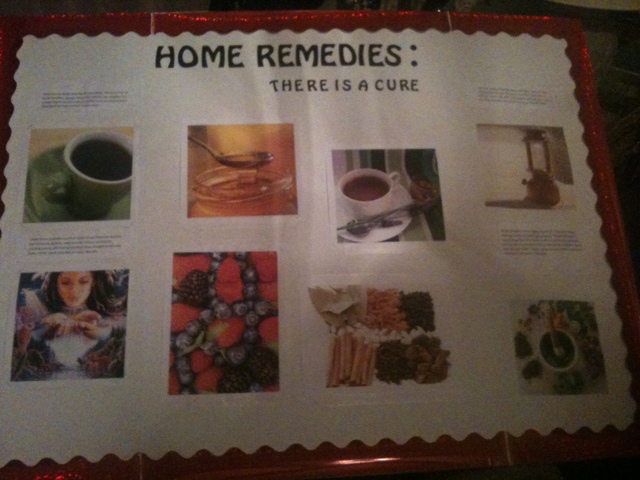 And a few days after that she showed me her paper.

Let's just say that any reader in search of a few home remedies would be sorely lacking in advice, except that honey is good for a sore throat and tea bags are good for a canker sore and kerosene used to be used to get rid of head lice.

And my work was done.

On the day of the fair -- a day I had to be in the office early as I would be the only one there -- and as I puckered up to kiss her good-bye as she boarded the bus at 7:45 a.m., she informed me thusly:

And she did. They found her some tea bags in the teacher's lounge, and some honey in the cafeteria. She had to settle for a printed picture of a lemon.

It does take a village.

Needless to say, my beloved child did not win the Social Studies fair. Nor did she place or show.  (A wonderful young lady with an autistic brother won with her project entitled, "Unlocking the Mystery of Autism.")

But her dad and I didn't get an "F" either. And we can hold our heads high.