The man I love 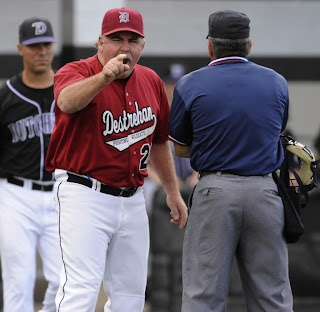 This is my husband. The man I love.


The guy in the middle.  With the red jersey on. Which matches his face at the moment. 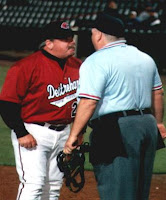 It wasn't the first time.  It won't be the last.

But, if his players don't listen to him or do what they're supposed to do, he can look like this:

And after the game, he usually looks like this: 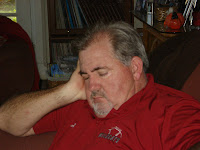 My husband is a high school baseball coach.  A pretty darned good one.  He is  377-216 overall in his career, 240-102 at his current school, which is located in the suburbs of New Orleans. His teams have made the playoffs every year of his tenure,  and have advanced to the state tournament six times. He has yet to win a state championship, however. But he will. Eventually.

I just know it.

The man I love has a love other than me. He has a mistress I will never overcome, never displace in his heart. And he brings her home with him every night. I can see her. I can smell her.

Her name is Baseball.

The 2012 season is about to begin in earnest. Which means he will be leaving me for his mistress more and more. There will be too many late nights. Too many dinners alone.Too many days I'll be left fending for myself when the sink stops up or the toilet overflows. Too many sleepless nights waiting for him to come home. Too many long weekends. Lonely weekends.

And spending my upcoming 50th birthday without him.

And when he does come home, I'll be there to pick him off and dust him off and send him back out to her again.