My daughter is in love.

My 10-year-old, pre-pubescent child is head over heels in love with a boy she's never met and, likely, never will.

Oh, I can't say I blame her. Not at all. He's an incredibly handsome, immensely charming, multi-talented, billionaire-to-be with great hair. He has it all -- looks, talent, charisma, money. And a million girls just like mine are crying their eyes out at the mere thought of his ever-so-pretty face.

Good mom that I am, I took my daughter to see the boy's movie today, doling out $27.00 (plus popcorn, drinks and Raisinettes) to see his rise to fame and glory on the big screen in 3D.

And, yeah. He was pretty darned cute.

And at the end, my lovely and innocent little girl leaned close to me and, with a catch in her voice said, "Now do you see why I love him?"

They're calling it "Bieber Fever."

And I understand completely. You see, I have had it before.

Actually, for me, it was John Cowsill Fever. 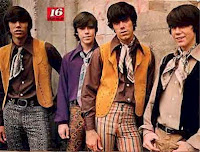 The youngest member of the singing family group The Cowsills (whom a lot of people have never even heard of), John Cowsill was my first love. Like The Biebs, he had that perfect face, that charming smile, an angelic voice and -- come to think of it -- the same hair!

I swooned over every photo of him in 16 Magazine and Tiger Beat (which are still around, by the way), and left standing instructions for my family to call me from my room whenever their milk commercial came on our (one) TV.

And my parents, good parents that they are, doled out their good, hard earned money to take me -- at the tender age of about 8 -- to their concert at Nicholls State University in Thibodaux. And I about died. I cried real tears of love and joy as he performed on the stage before me and I even survived the post-concert crush to get his autograph on my program (which was later destroyed when the hot water heater leaked in my closet).

But even then I was a fickle young lass. It didn't take long before I was so over John and moved on to ...

Oh My God (that's OMG for you youngsters).

That perfect face, that charming smile, that angelic voice and -- come to think of it -- the same hair!!!

Down came John's pictures and up went Donny's, wearing his famous purple shirt, of course.

My parents weren't all that great. They didn't dole out the cash for tickets to his concert in New Orleans sometime in the mid-1970s. (Why not mom?)

After taking my teenage stepdaughter to see her loves of the day, The Backstreet Boyz and N'Sync (losing about 10 percent of our hearing in the process), her mother and I made a pact. If Donny Osmond ever went on tour, then by God we were going. Together.

And one day my mom, perhaps attempting to make up for not taking me to see him in the 70s, called me up to let me know that my teen dream was, in fact, coming to Bay St. Louis, Mississippi to play the local casino. And, being a Gold Member, she could get tickets.

I immediately called up Cheryl, my husband's first wife, and said, "We're going!"

While our husbands had dinner and drinks, Cheryl and I shuffled into the theater at the Casino Magic along with about 1,000 retirees to see the boy we had both loved in our youth.

He still had that perfect face, that charming smile, that angelic voice. But not so much the hair. And he still had the power to make us both swoon. For at least an hour, my love for him was just as strong as it had been 30 years ago.

I still enjoy Donny. He's put out a couple of nice recordings in recent years. He's still not bad to look at and he still can dance. I even voted for him on Dancing With the Stars.

So, my dear child I get it. I really do.

Justin Bieber is lovely to look at, very charming and extremely talented from what I saw tonight. And he has very nice hair.

In fact, can I have one of your posters to put on my wall?