A death in the family

There was a death in our family last week.

Paw Paw Ed, a kind, gentle, sweet old man departed this life for the next and went to meet his maker.

It was not unexpected. He had been in declining health for several years, suffering from a myriad of illnesses and ailments that come from old age and years of hard work and hard living on the Louisiana bayous. Nearly a day after doctors removed the tubes that were breathing for him, he breathed his last.

And one sunny afternoon my nearly 9-year-old daughter got off her school bus with a happy smile and I had to sit her down and tell her that her grandfather had died. She got very serious.

Then she put her head on my shoulder.

Paw Paw Ed was not my father. Nor was he my husband's.

Joseph Edward Lodrigue was was the father of my daughter's birthmother. Her grandfather. And she knew him well.

Well, perhaps not well. We have visited with him several times over Lora Leigh's decade of life, traveling to their little house on the bayou in Dulac for Good Friday seafood boils. He never talked much, but sat in a corner in his rocking chair observing our little reunions that took place in his kitchen. Sometimes he would reach into his pocket to give Lora a dollar bill, a south Louisiana tradition I had to explain to my husband.

With a twinkle in his eye, Paw Paw would observe this mysterious little child, this flesh of his flesh who looked like them but did not live with them because she was given to us at birth. It took him a full year to even look at a photo of her, his ache was too great. But by the time he died, she was just another one of his grandchildren.

So much so that, when the family began putting together a list of survivors for the newspaper death notice, they included her name among the list of grandchildren.

That made me smile. And cry.

On Sunday evening, the three of us battled cold and rain to drive to an all-too-familiar funeral home in my hometown. Hand-in-hand, we made our way through friends and family we did not know to find the few we do.

Aunt Shirley. Uncle June. Ashlee, Lora's sister by birth. A couple of cousins we've met over the years. And Gail, the woman who allowed me to have her child.

We hugged. We cried. They thanked us for coming, as if we had done something extraordinary by showing up. And they marveled at how tall Lora has grown to be (she is nearly as tall as I am.)

Some others just stared.

I caught a few whispers and meaningful looks from throughout the room as Lora's relatives pointed her out to one another.

And that was a little weird.

Lora, meanwhile, tried not to look at the man she knew lying in his silver casket, holding a winning hand of 31 and a dollar bill to ante up.

At one point I did take her to a set of framed photographs next to the casket. We saw Paw Paw Ed as a young boy, as a handsome young man and even as and older gentleman before his illnesses began to bend him.

We saw photos of Gail as a young woman with her brother June and sister Shirley. And we saw photos of their mother, Rose, who died well before Lora was born -- otherwise we probably would not have her.

I pointed each one out to Lora, making sure she saw them.

And I made sure she saw the photos of her in the frame, one as a little baby with impossibly beautiful curls and a few with Ashlee and Gail.

And that made us both smile.

It was perfectly natural and normal that they should be there.

This is her family. And now it is ours. 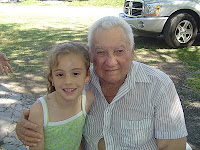